40th GENERALI BERLIN HALF MARATHON before a sport-historical comeback 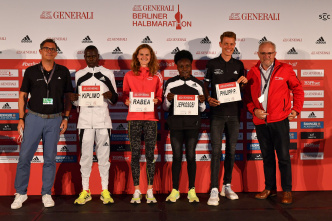 The GENERALI BERLIN HALF MARATHON will be Germany’s first major international road race since the start of the coronavirus pandemic. World-class fields will feature the former world half marathon record holder Joyciline Jepkosgei and fellow-Kenyan Philemon Kiplimo. A total of 21,576 athletes from 140 countries have entered Sunday’s race. 20,774 of them will run the half marathon distance. The GENERALI BERLIN HALF MARATHON will be the first road race this year worldwide to feature around 20,000 participants.

Originally scheduled to take place in April 2019 the 40th edition of the GENERALI BERLIN HALF MARATHON had to be cancelled again this spring because of the coronavirus pandemic. With a hygiene concept in place and after extensive consultations with the local authorities the race finally got the go ahead. „There was very good cooperation with the city, especially with the Senate Department for the Interior and Sport, so that we can now start the race,“ said Jürgen Lock, managing director of organizer SCC EVENTS. Participants have to be either vaccinated, have antibodies or need to provide a negative test by PCR-test to be able to participate in the GENERALI BERLIN HALF MARATHON. Spectators are advised to keep the minimum distance and to wear face masks. „This has worked very well at our recent 10 k race, the adidas Runners City Night,“ said Jürgen Lock and thanked all institutions and authorities involved. Then the managing director of SCC EVENTS continued: “With the 40th GENERALI BERLIN HALF MARATHON we are getting the great running sport back on track. According to our mission statement: We move Berlin. And the world! We want to build on this in the future and further optimize our commitment to sustainability. "

Safety and prevention are also top priorities for our title sponsor, Generali Deutschland AG. The GENERALI BERLIN HALF MARATHON is the first physical race of such magnitude in Europe that can take place again after the many Corona-related cancellations. Thanks to a comprehensive safety and hygiene concept in close cooperation with the Berlin state authorities, the GENERALI BERLIN HALF MARATHON can be held. It is thus a pilot project for other major events in Berlin and beyond.

The women’s race
Never before has there been such a strong elite women’s field in the history of the GENERALI BERLIN HALF MARATHON. There are four athletes on the start list who feature personal bests of sub 67:00. For the first time a runner will compete who has broken the world record at this distance: Joyciline Jepkosgei is the major favourite. The Kenyan has broken the world half marathon record on two occasions and in 2017 became the first female runner to record a time of sub 65 minutes. She ran 64:52 in Prague four years ago and then improved this record by one second in Valencia. With her personal best of 64:51 Joyciline Jepkosgei currently is the fifth fastest half marathon runner ever and the fastest ever entered in the Berlin race. „I thank the organizers to make it possible for me to compete here. It is not an easy time for all of us,“ said the 27 year-old current TCS New York City Marathon champion. „I ran my last international race eight months ago. But I am ready and I will do my best.“ Kenya’s Valary Aiyabei, Helen Tola and fellow-Ethiopian Bekelech Gudeta are the other three runners who have PBs of sub 67:00. Valary Aiyabei features a strong personal best of 66:14 which she achieved in the Ras Al Khaimah (UAE) race in 2019. Later that year she broke the course record of the Frankfurt Marathon with a time of 2:19:10. Ethiopia’s Helen Tola improved to 66:45 two years ago in the Istanbul Half Marathon where she finished third. Fellow-Ethiopian Bekelech Gudeta showed excellent form in this Turkish race as well, when she improved to 66:54 this spring.  Despite the strength in depth it will not be an easy task to achieve a time in the region of the course record on Sunday. Sifan Hassan (Netherlands) established this mark two years ago with a superb 65:45.  Berlin’s Rabea Schöneborn - twin sister of Deborah Schöneborn, who achieved a fine 18th place in the Olympic marathon - is the fastest German athlete entered. The 27 year-old intends to improve her personal best of 71:40.

The men’s race
The men’s leading group will aim for the course record on Sunday. It was Kenya’s Eric Kiptanui who clocked 58:42 in Berlin three years ago. „It is my goal to break this course record,“ said 22 year-old Philemon Kiplimo, who became the sixth fastest runner ever in the half marathon when he ran 58:11 in Valencia in December last year. „I have prepared for two months for this race and I am ready.“ Two other Kenyans are on the start list who feature personal bests of sub one hour. Among them is the athlete who heads the current world list: Felix Kipkoech clocked the fastest time in 2021 when he won the Siena Half Marathon in Italy with 59:35 in February. That mark could well fall in Berlin. Josphat Tanui has run slightly faster with a PB of 59:22. He ran this time in 2017 in the Czech city of Usti nad Labem on a course which is not regarded as particularly fast.  Philipp Pflieger and Tom Gröschel are two prominent German marathon runners. For them it will be the goal to improve their personal bests of 62:50 and 64:09 respectively. „I believe we have assembled fine fields. If weather conditions will be suitable we should see fast times and hopefully get a course record in the men’s race,“ said Race Director Mark Milde.