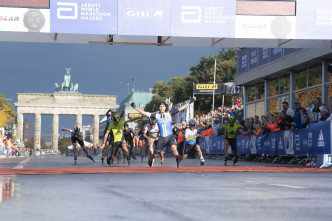 Felix Rijhnen (GER / Powerslide Matter World Team) and Sandrine Tas (BEL / Powerslide Matter World Team) are the fastest inline skaters at the 46th BMW BERLIN MARATHON 2019. The German Felix Rijhnen won in 1:10:30 hours ahead of the two Frenchmen Nolan Beddiaf and Elton De Souza in a spectacular mass sprint on the home straight. Bart Swings was knocked off the throne as the six-time winner of the BMW BERLIN-MARATHON inline skating.

And even with the women, the race was decided only on the final meters. Sandrine Tas from Belgium won first place with her time of 1:25:49 hours, millimeters ahead of Katharina Rumpus (GER) and Yi-Hsuan Liu (TWN).