The quest for fast times begins 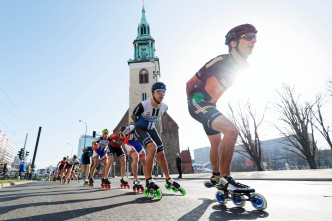 As in previous years, numerous top athletes will be using the GENERALI BERLIN HALF MARATHON Inline Skating to launch their season. While some of the top skaters have already completed numerous kilometers of training in warmer regions, others were still on the ice until recently. The Berlin spring classic is thus even more important as the first chance to see how prepared they are.

In the men’s race Sebastian Mirsch will give it all to defend his unexpected title from last year. But with reigning marathon world champion Felix Rijhnen and course-record holder Ewen Fernandez at the start as well, he will face two absolute top-class skaters, who are very familiar with the streets of the capital city.

In the women’s race the strong Powerslide Matter Racing Team supporting last year's winner Katharina Rumpus and her team mate Chloé Geoffroy will hardly be beatable. However, Katja Ulbrich and Sabine Berg, who also has won the race in the past, also have legitimate hopes for a top position.

The race marks the start of the 2019 GERMAN INLINE CUP, which will be held for the twelfth time this year. Once again, there will be a total of five events for professionals and fitness skaters in Germany, Austria and the Czech Republic. The grand finale will be at the BMW BERLIN MARATHON on September 28, 2019.