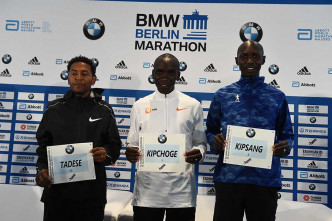 Two outstanding athletes from Kenya face each other in the 45th edition of the BMW BERLIN-MARATHON on Sunday when Eliud Kipchoge and Wilson Kipsang meet for the third round of their rivalry in the fastest marathon in the world. Kipchoge’s best of 2:03:05 is only eight seconds slower than the current world record and Kipsang has done his share of record breaking, since he ran his best of 2:03:13 to break the then world record and win Berlin in 2013. Kipchoge against Kipsang in the marathon is like Lionel Messi versus Cristiano Ronaldo in football or Rafael Nadal and Roger Federer in tennis.

Eliud Kipchoge’s aim on Sunday is to break his personal best and attack the world record while Wilson Kipsang is equally primed for a record chase. So far the score in their Berlin rivalry stands level at 1-1. Kipsang took an early lead by beating Kipchoge here in 2013 but the Olympic champion hit back to win the Berlin title last year.

As a reflection of the race’s international attraction, 133 countries will be represented among the 44,389 participants. This is a record entry figure. The BMW BERLIN-MARATHON is an IAAF Gold Label Road Race and part of the Abbott World Marathon Majors Series (AWMM) which also comprises Tokyo, Boston, London, Chicago and New York. The new series, the 12th edition, of the AWMM begins in Berlin on Sunday and will also conclude with the 46th edition of the BMW BERLIN-MARATHON next September.

Then men’s marathon in Berlin has become a yardstick for performances at the distance worldwide. Over the past 15 years in September its flat course has been the stage for half a dozen world records. Since 2003 no other marathon has produced a men’s world record. For good measure, the world’s fastest time for the year by a man has been run at every BMW BERLIN-MARATHON since 2011. The current world best time for the year is the 2:04:00 by the Ethiopian Mosinet Geremew, set in Dubai in January. The world record stands at 2:02:57 by Kenya’s Dennis Kimetto to win Berlin four years ago.

Eliud Kipchoge held back slightly when it came to Friday’s press conference and talk of a world record attempt: “After winning in London in April I concentrated on preparations for Berlin and can assure you that I shall run well on Sunday. I want to improve my personal best,” said the man who has won all but one of his eleven marathons and is regarded by many as the best ever at the distance. Breaking the world record on Sunday would clearly strengthen his status still further. When pressed further about world record possibilities, Kipchoge simply responded: “Yes, it would of course be very good if I could run that.”

Perhaps the reason for his reluctance to commit fully in public is caused by two previous world record attempts in Berlin where the 33-year-old had bad luck. In 2015 his shoe insoles came lose and, despite being in pain, he still won in 2:04:00. A year ago bad weather put paid to the world record attempt as Kipchoge set a “Rain World Record” to win in 2:03:32. No athlete had ever run a marathon so fast in such conditions. Kipchoge showed he can run faster than 2:02:57 when he clocked 2:00:25 last year in Monza, albeit the race did not conform with international regulations.

The only man to have beaten Eliud Kipchoge in the marathon is Wilson Kipsang and that was in 2013. Kipsang broke the world record in that Berlin race with 2:03:13. The 36-year-old has plenty of experience and achieved consistently world class performances over many years, breaking 2:04 on four occasions – a total Kipchoge has not yet matched.

Wilson Kipsang plans to run more cautiously than Kipchoge on Sunday: “I want to run similarly to my world record in 2013. I ran the second half faster than the first then. This Sunday I want to reach halfway in 61:30,”said Kipsang, who dropped out of Berlin last year at 30km.

Among those likely to be in the chasing group with Kipsang is the world record holder for the half marathon, Zersenay Tadese of Eritrea. “I want to set a personal best on Sunday,” said Tadese, whose best stands at 2:10:41.

Elite men at the 2018 BMW BERLIN-MARATHON and their PBs