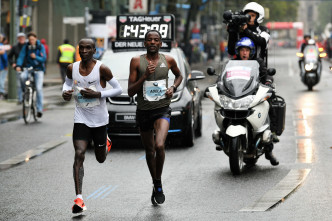 Last year rain and wet roads got in the way to challenge the world record. Surprisingly a maratrhon newcomer challenged the champion until late in the race - Guye Adola from Ethiopia.
© SCC EVENTS/Petko Beier

He is unbeaten since 2014 and during this time has won eight marathons including the Olympic Games in Rio in 2016. Kipchoge has also covered the marathon distance of 42.195 kilometres in 2:00:25 in a sponsored test run in Monza in May, 2017, two and a half minutes faster than any human being had previously achieved. Eliud Kipchoge is without a doubt the best marathon runner of all time. The one thing missing is the world record.

That is set to change in Berlin, although he says, with typical understatement: “I only think about my personal best. If I run 2:03:04, I’ll be happy.” Who is going to supply that missing link? If he doesn’t break the world record now, then when?

He doesn’t have a great deal of time left to achieve this. At present he plans to compete through to the Olympic Games in Tokyo in 2020. Until then he wants to add the titles from the Marathon Majors races in Boston, New York and Tokyo which are missing from his collection and make a further attempt under “Test” conditions on breaking the two-hour barrier as he did in May last year. When that moment might come is anyone’s guess. “It asks a great deal from everyone involved but I hope to have another chance.” At some point he will no longer be capable of his present level of performance, let alone to raise it. It’s important to remember that the Kenyan, who reads Ancient Greek Philosophy in his spare time, has already had a long career: 15 years ago he became World 5,000m champion, competing as a junior according to his birth certificate, and from 2003 to 2012 he ran under 13 minutes for the distance every year apart from 2018. The fact that he moved to the marathon when still running world class times on the track and not towards the end of his career, as did Haile Gebrselassie, Paul Tergat or Kenenisa Bekele, explains his unparalleled supremacy, along with his ability to prepare with matchless precision.

There is more than one reason why he has failed to break the world record so far. The most significant is simply bad luck. In Berlin in 2015 the insoles of his shoes came loose after only a few kilometres. Anyone who has run a marathon can imagine what that means. Towards the end of the race he had to slow down and not push off so much because his legs were giving him a lot of pain. Despite this he finished n 2:04:00, only 63 seconds outside the world record. The following spring in London he only realised in the last few kilometres how close he was to the world record, finishing in 2:03:05, just eight seconds outside. Then came 2017 and he prepared with his unique single-mindedness for almost half a year in an attempt, organised by his sponsor Nike and with scientific support, to become the first human being to cover 42.195 kilometres under two hours. In the end he failed but was only 0.6 seconds slower on average per kilometre.

His form was outstanding before the BMW BERLIN-MARATHON last year. But just when the three strongest marathon runners in the world were brought face-to-face, the weather failed to co-operate. For the first time in seven years of world records in Berlin from Patrick Makau, Wilson Kipsang and Dennis Kimetto, rain, wind and a soaking wet road surface foiled attempts at the world record. Eliud Kipchoge stopped the clock at 2:03:32, 35 seconds outside Kimetto’s world record. The coaches and managers in attendance were all agreed on one point: anyone running such a time in those conditions has the potential to go “Sub-2:02.” The maestro didn’t want to get involved in such speculation and simply commented: “In preparation for a marathon you can control everything apart from the weather. In terms of the conditions, this was my hardest marathon.”

His next chance came in London on April 22. In the build-up to the race he had only spoken about wanting to run a “Beautiful Race.” He made no mention of a record attempt. Yet the race splits quickly showed what he meant by a “beautiful race”: 13:48 for the first five kilometres (on course for a finishing time of 1:56:27!) and 61:00 for halfway! The lead group at that point still comprised seven runners but one after another they dropped back. Kenenisa Bekele took almost 68 minutes for the second half and the previous year’s winner Daniel Wanjiru took even longer with over 69. After 30 kilometres Eliud Kipchoge had to cope with both fatigue and a stitch. Nonetheless he won in supreme style in 2:04:17. The story coming out of his camp was that his training performances had been even better than in preparation for the Breaking-2 attempt in Monza and Berlin in 2017. His reaction was: “I don’t like talking about the past. When a race is over, I think about the next one.”

What now? Preparation has gone well, he is quoted as saying. “Everything has gone to plan.” He dismisses the frequent heavy rain of recent months, saying: “I train, I don’t complain.” Following the motto of “Never Change a Winning Formula”, he has followed the same programme as for his recent marathons. (A detailed training schedule of his preparation last year for Berlin can be found at www.sweatelite.co/eliud.kipchoge-full-training-log.) In response to the question whether, in the light of his great experience, he decides what he does and when he does it, he confounds expectations by replying: “Patrick Sang is my coach. He decides. There is no discussion as far as training is concerned. He is the teacher, I am the student. Do you know any university professor who discusses their lectures with their students? Or a doctor who negotiates about medication with their patients? Patrick is responsible for the training programme, I for carrying it out.”

Eliud Kipchoge is not only the greatest but also a special kind of person. Although he is a dollar millionaire several times over, he and his wife life with their three children in the same modest house they’ve always had.  “We don’t want our children to grow up any differently to others,” he says.

Eliud Kipchoge will be part of the show at "Meet the Stars" on Friday at the Hall of Fame near Brandenburg Gate at 6.30 pm.