Past winners Masai and Mengich clash in Berlin Half Marathon 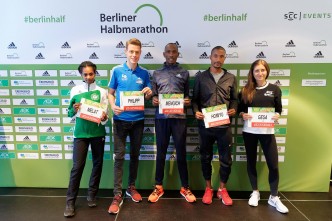 Gilbert Masai and Richard Mengich, the winners of the past two editions, will clash in the Berlin Half Marathon on Sunday. The two Kenyans are the likely favourites in Germany’s biggest half marathon, which will see its 38th edition with a record entry of 36,000 runners. Ethiopia’s Kejeta Melat is the fastest woman on the start list with a personal best of 68:41.

Kenyans have dominated Germany’s biggest and fastest half marathon in the past 20 years. Only three times the men’s race was won by a non-Kenyan runner since 1998. There is a similar pattern in the women’s race, with 14 of the past 20 winners coming from Kenya.

While Gilbert Masai returns as the defending champion it is Richard Mengich who won here in 2016. The two former winners are additionally the only two runners on the start list who feature personal bests of sub one hour. Masai’s personal best stands at 59:31 while Mengich has run 59:35. „I have trained well and I am ready. I have recovered from a stress fracture in my left leg which happened last year. The same happened back in 2015 and then I came to Berlin and won the half marathon. My aim is to repeat this on Sunday,“ said Richard Mengich.

Two fellow-Kenyans could produce a surprise on Sunday: Newcomer Erick Kiptanui already caused an upset when he took the prestigious Lisbon Half Marathon last month. Despite strong winds he ran a fine time of 60:05 in his debut at the distance. He will target a sub 60 minutes’ result in Berlin. Frederick Kipkosgei will run his half marathon debut. He mainly competed at 5,000 m in recent years. In this event he was fifth in the World Junior Championships in 2014.

Germany’s Homiyu Tesfaye returns to the Berlin Half Marathon as well. The former Ethiopian, whose main event is still the 1,500 m, ran a strong race in 2017, when he finished seventh with a PB of 62:58. However looking back Tesfaye says: „It was not that good. My current form is much better.“ He recently improved to 61:20 in The Hague in March. „Now it is my aim to go for the German record on Sunday,“ said Homiyu Tesfaye. This mark was established back in 1993 by Carsten Eich, who won the Berlin Half Marathon with 60:34 - at that time a European record as well.

Ethiopia’s Kejeta Melat, who recently improved by almost two minutes to 68:41 in Venlo (Netherlands), hopes to run another personal best on Sunday. „It was a little bit windy in Venlo, I hope the conditions will be better in Berlin,“ she said. With a personal best of 70:13 Kenya’s Maryanne Wangari is the second fastest woman in the field. Fellow-Kenyan Eunice Kioko ran 70:31 last year.

A number of European runners could do well on Sunday or even produce an upset. Maja Neuenschwander (PB: 70:46) and fellow Swiss Martina Strähl (71:50) are among them. And there are two Germans as well: Katharina Heinig hopes to go well under her personal best of 72:55 and Gesa Felicitas Krause will make a second attempt at the distance. The reigning European steeple chase champion did not finish her half marathon debut a year ago in Ras Al Khaimah (UAE). But she is eager to rectify this in Berlin. „I am happy to return to Berlin - though in a very different event. I am looking forward to the half marathon and I am in top shape. However it is difficult to predict a time,“ said Krause, who recently trained in South Africa and travelled directly to Berlin from there.