Kenenisa Bekele: “I think I am ready" 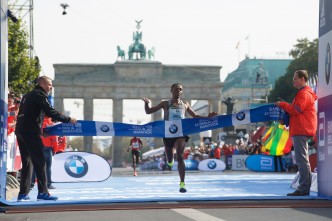 Between 2001 and 2007, Kenenisa Bekele won 27 races. Over the course of his incredible career, he was Olympic champion three times, won the World Championships five times, was Cross Country World Champion twelve times and won the Indoor World Championships. In 2004 and 2005, he set new world records in the 5000m and 10000m, which still stand today. These were the years when his manager Jos Hermens once stated: “He is not Jesus, as he cannot walk on water; but on land no one can beat Kenenisa Bekele”.

That changed when the now 35-year-old Ethiopian switched­­ over to the marathon. In seven races, he has won twice and dropped out twice, came in second, third and fourth one time each. Last September in Berlin, however, he was just six seconds over Dennis Kimetto’s world record time, finishing in 2:03:03. He decided against competing in the World Championships in London as he did not feel fit enough—and maybe because he preferred to test his limits. So, the question now is: Which Bekele will we see on Sunday? He is carefully optimistic: “I think I am ready. Training has not always been optimal, as we had a lot of rain, so I would put it at 90%. I ran between 160 and 180 km a week, and luckily had no major health issues. There are always

With Eliud Kipchoge, Wilson Kipsang and Bekele, the three current top marathon runners will all be competing in Berlin—something that usually only happens in London, where they have a larger budget. But for the stars of the running scene, running on the fastest course in the world is more important than the money. But this also brings some dangers with it. As has often been experienced in London, too many cooks can spoil the soup: at some point it is only about the win. But Bekele sees things differently. “There is no question that whoever is running in Berlin wants to have a fast time”.

If Bekele is at his best, he will make life difficult for Eliud Kipchoge and Wilson Kipsang. But it is hard to make any predictions with him. How will his body react if the pace is under 2:02:30? Since changing over to the marathon, he has repeatedly had issues with his Achilles and hamstring muscles. He stated, “After my premiere in Paris, I was never able to train the way you have to for the marathon. My preparation for Berlin last year was not as good as it should have been”. Nonetheless, he ran 2:03:03. And now? “I hope to achieve a personal best of under 2:03:00. I have heard that Eliud wants to run under 2:02. We will see”.

After his second marathon in Chicago, where he had to let the leading trio forge ahead without him after the 30-km mark, he sought out the expertise of Italian “guru” Renato Canova, who often set up camp out in the Kenyan city Iten, but was frequently sighted in Ethiopia, as well. But even working with Canova did not bring the success he was looking for. In January 2015, Bekele dropped out of the race in Dubai after 30 kilometres—again with issues with his hamstring muscles. But Canova believed the real issue was with his Achilles tendon.  “He could feel it during training and during the race, which led to cramps”.  Then Bekele had to pass on London and could not run a marathon in the fall either. It was time for therapy.

Then came London 2016: Third place in 2:06:36, just two and a half minutes behind Eliud Kipchoge. After all of the problems during the previous year, he was only able to really train during the final seven weeks. The fact that he was not selected for Rio caused him to respond with an act of defiance. He wanted to show the Ethiopian association that he should have been there. And thus followed—completely unexpected for many—his fabulous performance in Berlin. A year later he still looks back positively: “I only realised on the last few kilometres how close I was to a world record. I gave it my all. Six seconds is really aggravating. But I proved that I could run a world record”. The rollercoaster ride was not over yet: In Dubai he fell in the throng at the start and had to give up, and in London he was surprisingly defeated by the Kenyan newcomer Daniel Wanjiru.

When he switched to the marathon, Kenenisa Bekele had two dreams: He wanted to be crowned Olympic Champion in Rio and at some point snatch the world record. Only one dream is left. Although he spends some time with his various businesses, a hotel and training centre outside of Addis Abeba, and with his family, motivation is never a problem: “The fire is still burning”, he says. Should the man with this amazing talent achieve this last big goal in the autumn of his career, the discussion would be over about who is the greatest runner of all times. But he does not have too much time left. After fifteen years performing at the highest level, the body begins to rebel.