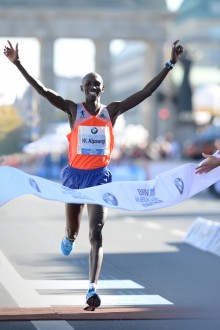 Wilson Kipsang joined an illustrious group of runners when he broke the world record at the 2013 BMW BERLIN-MARATHON with his time of 2:03:23. Kipsang of Kenya, now 34, contributed to the BMW BERLIN-MARATHON’S status as the fastest marathon in the world. Since Paul Tergat of Kenya ran the world record of 2:04:55 in Berlin in 2003, a further five world records have been set for the classic distance of 42.195km, the last one set in 2014 by fellow Kenyan runner Dennis Kimetto.
Following his world record win in 2013, Wilson Kipsang went on to triumph in his two subsequent marathons, winning in London in 2014 and New York the same year.

The most successful long distance track runner of all time, Kenenisa Bekele of Ethiopia, will be running his fifth race at the distance when he lines up for this year’s BMW BERLIN-MARATHON. The 34-year-old is a triple Olympic champion and five times winner of World championship titles at 5 and 10,000m. That is by no means the end of his achievements which also include eleven titles in the World Cross Country Championships for the short and long course events. He is also world record holder at 5 and 10,000m.

Kenenisa Bekele marked his marathon debut in 2014 with victory in Paris in 2:05:04, followed by fourth place in Chicago the same year in 2:05:51. His progress faltered in Dubai in early 2015, dropping out because of injury but he proved his pedigree once again with 2:06:36 for third place in London in 2016. It’s worth noting that his illustrious predecessor and compatriot, Haile Gebrselassie, went to the start line of seven marathons before his own great talent was fulfilled in the marathon – and what’s more, it was in Berlin in 2007 when Haile ran the first of his two world records in the marathon with 2:04:26.

The BMW BERLIN-MARATHON is one of the Abbott World Marathon Majors (AWMM), a series of the six major marathons worldwide (Tokyo, Boston, London, Berlin, Chicago and New York).

Winner of 10 World Cross Country titles from 2002 to 2006 at both short and long events as well as the long distance world title in 2008.

World Records set in the Men’s Marathon in Berlin