MY JOURNEY - Samba against hitting the wall 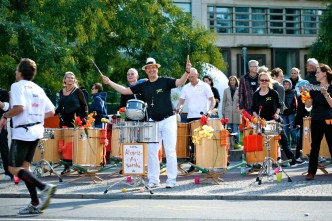 Thomas Kraberg’s “Alegria do Samba” is one of dozens of bands that year after year help make the BMW BERLIN-MARATHON a true street festival. At no other marathon in the world are there as many diverse musical styles to be heard.

Alegria do Samba (in English: Joy of Samba) has a very important task at the BMW BERLIN- MARATHON. They are the last samba band before the finish. At about kilometre 38, where many runners “hit the wall”, Thomas Kraberg and his crew provide Brazilian rhythms and full body action to add an extra portion of samba power and “drum” the runners towards the finish line. This will be the troops 14th time performing. Thomas Kraberg’s personal marathon music premiere is even older. ­­

The 51-year-old developed his passion for drumming years ago. Early on, he performed with Arabic and African instruments. “For our ears, some of the rhythms seem strange and unusual. But most people easily enjoy the sounds of the Brazilian drums,” Kraberg says. “The atmosphere is amazing, the people are happy and smile the whole time.” So Kraberg, an engineer who works in developing electronics, decided to move to the sounds of the drums, shakers and whistles. He has been giving the beat for over 1o years now.

While the other members of the band can take a break now and then during the 4-hour on-going samba performance at the BMW BERLIN-MARATHON, as the band leader, Thomas has to make it through.  The conditioning he requires is on par with that of a marathon runner. Even experienced drummers have to tough it out at the end to keep on going. The grateful smiles of the runners, who are also pretty exhausted by that point, help get them through the difficult phases.

Even thought the performances by Alegria do Samba, whose members range between 20 and 65 years of age, always appear to be so playful and spontaneous, their pieces are the result of hard work. The group meets regularly in a youth centre in Reinickendorf in Berlin. Almost every time after the BMW BERLIN-MARATHON, Thomas Kraberg receives inquiries from people who want to join them. “Many of our members were looking for something fun to do in their free time, but had no real idea of exactly what. Then they saw us at the marathon and became completely enthralled. That makes us happy, of course.”

Everybody who is “infected” with the samba virus is cordially invited to join Alegria do Samba. “With this type of music, newcomers can be integrated quite quickly,” Kraberg explains. “Even if they come with no experience, they quickly have a sense of success.” Step by step, the newcomers get initiated into the secrets of the samba at Alegria do Samba. They learn the rhythms, playing techniques, and synchronised movements. The main focus is always on having fun and enjoying the Brazilian instruments, Kraberg emphasises. Everything else comes on its own.