MY JOURNEY - "The Keeper of the Course" 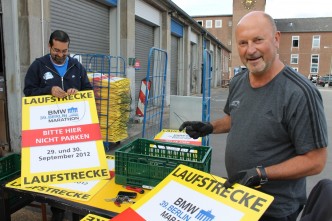 The man in charge of the course layout, Michael Feistkorn, knows the course of the BMW BERLIN-MARATHON like the back of his hand. He is constantly underway between the start and finish, especially in the weeks before the race. His journey requires attention to detail, and he closely examines every single kilometre.

“I have the expected difficult spots under control”, the 63-year-old states. “But a bunch of little uncertainties always remain. Suddenly someone has parked a heavy container and no one knows how it got there. Or a water pipe has burst and has to be repaired. The city is alive, and one really notices that in such moments.”

“In September, I spend most of my workday on the course,” says the man, who is originally from Erfurt and has been doing this job for the past 10 years. He has to have a good eye for any spots that could be dangerous for the skaters. Gulley covers and tram tracks, which could cause a skater to wreck at high speed, have to be secured. About two weeks before race day, he and two colleagues move along the course equipped with ladders, wire and pliers to attach approximately 800 course signs on the lampposts. This is a hard job that takes about three days. On Monday before the race, the machine that paints the blue stripe with the ideal path gets to work. In the night from Thursday to Friday, a special task awaits Feistkorn. “Every few years our course is controlled by AIMS (Association of International Marathons and Distance Races). That is a little bit like a car inspection,” Feistkorn explains.

The head of AIMS, Hugh Jones, once a very successful marathon runner himself and winner of the London Marathon in 1982, together with two accredited measurers, will take an exact measurement. To do so, they do not use GPS or any normal car tachometers, but rather a so-called Jones Counter. It is mounted onto the front wheel of a bike. The number of rotations is captured exactly. Before the three measurers hop on their saddles, the wheels are calibrated and the tire pressures are adjusted. Then they ride behind one another down the entire course on the exact same line. At the finish, their results are compared. Only if they are within a certain margin of error does the course count for recognising records.

Feistkorn will be escorting the cyclists through the city with the police to ensure that they can proceed without any hindrances, as for part of the course they will have to go the wrong way on the roads. He will, of course, be crossing his fingers that the course passes the test without any issues. “It is a little bit like dance on the edge of a razor. There is not much you can do to change things at the last minute. We can only really adjust the start or finish, if that is necessary.”

When the broom wagon has made it to the finish at the end of the day on Sunday, the next busy phase begins for Feistkorn and his crew. Shortly after the city trucks come through to clean up all the mess along the course and especially at the refreshment points 20 minutes after the last runner passes by, they begin to take down the street signs. The fact that they have become popular souvenirs does not bother him. “Not a problem. That means a little less work for us.”