MY JOURNEY – " Motivation for the whole year to keep on running” 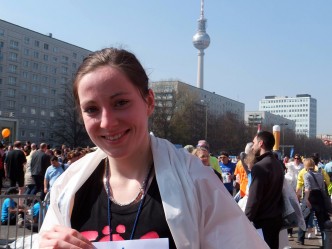 “I used to always get a note from the doctor to avoid any kind of sporting event at school. Today, running is totally a part of my life.“ Christin Schaffer is 24 years old, a bright young woman whom one can no longer imagine as not being athletic.  The young accountant is packed with energy, and just running is no longer enough for her. “I think it is important that it is possible for so many people to participate in a big event like the BERLIN MARATHON, and I want to do my best to support it.” That is how Christin Schaffer explains her motivation to work as a volunteer for the second time at the BERLIN MARATHON. “If there were not enough volunteers, the runners would have to pay a lot more to participate, and then the marathon would only be possible for people with lots of money.”

One thing Christin loves about running is the independence it offers. “That is the great thing about it. You can run without having to invest much in equipment. Into your running shoes and off you go. It doesn’t matter what time of day or night it is. You are not dependent upon anyone else or a certain hour.” Since Christin knows how inspiring the sport can be, she will be helping out at the finish line again at the skating race on Saturday and on Sunday she will provide drinks at one of the refreshment stops. “I enjoy doing that, not because of the free shirt, but because I get a lots of positive feed-back for my work by the runners on those two days: motivation for the whole year to keep on running.”

Christin Schaffer began running regularly one and a half years ago. When the former resident of Stralsund (on the Baltic) moved to Berlin three years ago to begin her work as a customs agent after finishing her vocational training, she did not find a good fit for a gym where she could box, which she had begun a year and a half before.  She was not willing to deal with the long trip that would be necessary to reach a gym, so at some point she began running instead, and soon was successful with it. She now can run 10 kilometres in 52 minutes. Her new goal: 49 minutes. In order to achieve this goal, she is integrating running into her daily life. “For instance I bring my running gear with me to work and when the day is done I run home,” the customs agent says. Since running is a big part of her life, she is happy that both her family and her partner support her. “My girlfriend not only gives me books and films about running for my birthday, but she also accompanies me on her bike when I run. That gets me moving and makes me happy.” Sometimes Christin’s little sister comes down from Stralsund to watch her official races and cheer her on along the road. “That gives me strength when a run isn’t going as well as I had hoped.” Since Christin knows how important the people are who line the course at a big race, her favourite place to volunteer is at the finish line where she hands out the medals. “The unbelievable faces made by some of the runners when they ask if they really made it are something you have to experience in person in order to understand the emotions that these runners have."