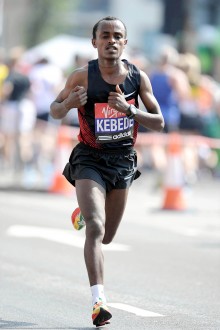 Tsegaye Kebede ran 17 marathons and finished 14 in the top-3.
© PHOTORUN

Dennis Kimetto of Kenya and Tsegaye Kebede of Ethiopia are the top contenders on the world´s fastest marathon course in Berlin.

Dennis Kimetto (30) placed second in the 2012 BMW BERLIN-MARATHON clocking the fastest time ever for a first-time-marathoner (2:04:16), one second behind fellow Kenyan Geoffrey Mutai. Kimetto´s rise to the top came late as he won his first major race at the age of 27, a halfmarathon in Nairobi. In the following year (2012) he won the RAK Half Marathon (United Arab Emirates) and the Vattenfall BERLIN HALF MARATHON. A few weeks after his Berlin win he ran a world record for 25 k (1:11:18), again in Berlin bettering the mark held by Sammy Kosgei (Kenya) by 32 seconds. In 2013 he won the Tokyo Marathon (2:06:50) and the Bank of America Chicago Marathon (2:03:45), both with course records, the latter being the third fastest time ever run on a legitimate course.

Tsegaye Kebede (27) is one of the most successful marathon runners ever. He finished 17 marathons of which he won six and placed 2nd three times followed by five 3rd place finishes including bronce medals at the Olympic marathon 2008 and the World Championship marathon 2009. His personal best of 2:04:38 he reached winning the Bank of America Chicago Marathon in 2012.

Last year Tsegaye Kebede won the World Marathon Majors´ Series 2012/13 cashing in 500,000 $ of prize money. World Marathon Majors is a series consisting of six of the largest and most renowned marathons in the world: Tokyo Marathon, Boston Marathon, Virgin Money London Marathon, BMW BERLIN-MARATHON, Bank of America Chicago Marathon and TCS New York City Marathon. It was founded in 2006. Kebede is leading in the WMM 2013/14 Series.