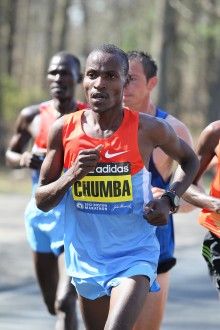 2014 World Marathon Majors competition picked up where it left off last year, with two more course records falling at today’s 8th annual Tokyo Marathon. Kenya’s Dickson Chumba and Ethiopia’s Tirfi Tsegaye won their first WMM event titles in style, posting course records of 2:05:42 and 2:22:23, respectively. Chumba’s victory placed him in a four-way tie for sixth place in the 2013-2014 WMM series, while Tsegaye catapulted from 24th to fourth in the 2013-2014 rankings

In Tokyo’s second year as a World Marathon Major, more than 36,000 athletes crossed the start line on a cool, overcast day in Japan’s capital city. The conditions proved to be perfect for marathon racing, as Chumba bettered the men’s course record by more than a minute (previously 2:06:50 set by Kenya’s Dennis Kimetto last year), and Tsegaye carved more than three minutes off the women’s course record (previously 2:25:28 set by Ethiopia’s Atsede Habtamu in 2012).

Despite arriving with a sub 2:06 personal best, Chumba was not favored as a likely winner, as his previous WMM best was a seventh place showing at the Boston Marathon last spring. He also started but did not finish the 2012 Boston and 2011 Chicago marathons. With the lead pack still 12-strong through 30K, it was Chumba who produced the surge that dropped the race favorite Abel Kirui of Kenya, the two-time world champion. By 35K, the pack was down to six, and 5K later, with Chumba in charge, the only athlete hanging on was world championship bronze medalist Tadese Tola of Ethiopia. Chumba broke the finish tape in 2:05:42, a personal best by four seconds, and Tola followed 15 seconds later in second. In total, three athletes were under the previous course record, as Kenya’s Sammy Kitwara was third in 2:06:30. The top five was rounded out by Kenyans Michael Kipyego (2:06:58), the 2012 Tokyo winner, and first-time WMM point-scorer Peter Some (2:07:05). Kirui was 10th in 2:09:04.

Tsegaye won a hard-earned victory over fellow Ethiopian Birhane Dibaba. Like Chumba in the men’s race, Tsegaye was the aggressor, moving to the front near 30K and dropping race favoite Lucy Kabuu of Kenya by 35K. With one kilometer to go, Tsegaye appeared spent and Dibaba seemed on her way to victory. But the 2012 Berlin Marathon runner-up fought back with half a kilometer to go, crossing the finish line seven seconds ahead of Dibaba. Kabuu was third in 2:24:16, and Caroline Rotich of Kenya was fourth in 2:24:35, putting the top four under the previous course record. Fifth place went to WMM rookie Janet Rono of Kenya with a personal best 2:26:03.

For more, go to worldmarathonmajors.com