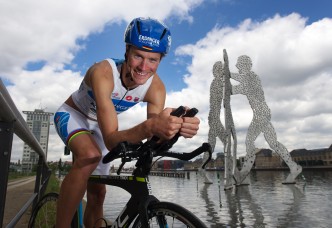 Michael Raelert at the River Spree where the 1.9 km swimming course will be.
© SCC EVENTS/Camera4

Michael Raelert will be the top shot triathlete at the start of the IRONMAN 70.3 Berlin on June 16th (1.9 km Swim, 90 km Bike, 21.1 km Run). He is the fastest triathlete on this distance having clocked 3:34:04 hours in Clearwater, Florida, when he won his first IRONMAN 70.3 World Championship in 2009. He doubled his world championship triumph a year later und added a European Championship also in 2010. In 2012 he again became European Champion winning the Wiesbaden  IRONMAN 70.3.
“The Berlin event suits very well into my preparation for the IRONMAN 70.3 European Championship in Frankfurt on July 7th", Raelert stated, "and I am looking forward to do the first race in my new home town."
Michael Raelert, who is 32 years old, had moved from Rostock, his birthplace, to Berlin in the beginning of 2013. His elder brother Andreas is the world record holder at the IRONMAN distance (3.8 - 180 - 42.2 km).