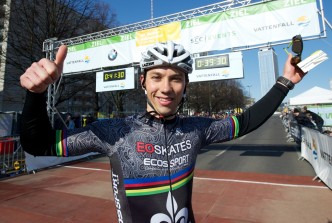 Julien Levrard and Katharina Rumpus are the winners of the 33rd Vattenfall BERLIN HALF MARATHON Inline Skating. Quite fitting to the motto “The best start into spring”, the 1,902 skaters were not only greeted by about 200,000 spectators, but by a bright sunny day as well. The classic spring event is also the celebration of the season’s start of Germany’s most successful race series, the GERMAN INLINE CUP.  There were not only winners in the pro category, but for the fitness skaters as well, who were ranked in their own category within the framework of the GERMAN INLINE CUP. The fastest woman across the finish was Susan Colbow (SC DHFK Leipzig) in 40:01 minutes. In the men’s race, Fabian Gacon (39:50 minutes/SCC Skating) got his foot across the finish line first.

The 34th Vattenfall BERLIN HALF MARATHON Inline Skating will take place on March 30, 2014. Online registration will open at noon on June 3.