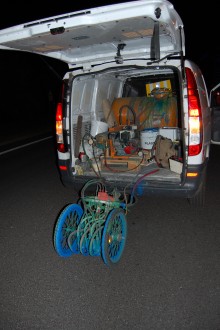 Strange blue lines on the streets can be seen at many marathons around the world. But why? What does this blue line mean? Is it really the racing line as many people say it is?

With a few exceptions, such as the New York Marathon, this is really the case. While the blue line in New York is always visible in the middle of the street and serves as a route marker line, the blue line is at the majority of city marathons seen as a racing line, especially for the professional athletes. It marks the shortest route between the start and the finish. The ones running exactly on the blue line  in Berlin, for example, run exactly 42,195 meters to the finish and thus wasted no superfluous meters. Other than in New York, where it is about 43 kilometers from start to finish on the blue line.

With the drawing of the racing line, the marathon week traditionally starts.  The head of the blue line department is Wolfgang Weising, chief editor of the monthly journal "Laufzeit". A few days before the marathon the drawing takes place. A white van with a compressor, boiler and color marking machine starts in the evening to get the color onto the streets of Berlin. A police escort helps to have a free street, as sometimes the opposing street has to be used. Approximately six hours, 42,195 meters, 10,000 spray actuations and 140 liter of paint later, the convoy will arrive back at the Brandenburg Gate. Only rain and oncoming traffic can delay Weising and the team.

All three meters, the machine automatically sprays three parallel lines on the asphalt. In the past 20 years 2,800 liters color were painted on the streets of Berlin, a total of 843.9 km, and in a few days yet  another 140 liters and 42.195 km will be added.