Countdown: 28 days to go - The fastest ever men in history: Geoffrey Mutai 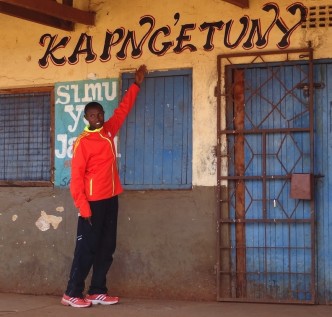 As the BMW BERLIN-MARATHON is one of the fastest marathons in the world, many of the top athletes come here year after year to improve their personal best or even to fight for a World Record time. This year the world’s fastest marathoner ever, Geoffrey Kiprono Mutai, joins the elite field in Berlin. In Boston 2011 he ran the 42,195 km in fabulous 2:03:02 hours and bettered the marathon World Record from Haile Gebrselassie (Berlin 2008). But it didn´t become the new World Record because the course in Boston doesn´t correspond to the required rules. In the same year, Mutai broke the old Course Record in New York as well.

At this year’s Boston Marathon he unfortunately had to give up due to stomach problems and wasn´t nominated for the Olympic Marathon in London.

Mutai participated at the BERLIN-MARATHON already in 2010, but in the final sprint he wasn´t as strong as his fellow countryman Patrick Makau and became second in 2:05:10 hours.

Some weeks ago we asked you, what you would like to ask Geoffrey Mutai. Here are your questions and his answers:

How were you able to cope with the competitive environment between young athletes in your home region?
Geoffrey Mutai: I just saw I got talent in running and joined a training group. My first goal was to run local races and after I was successful with it, I was hoping that I would have a chance to compete outside Kenya. I see that they are more competitive young athletes out there, so the better they are, the more I have to train to be stronger than them.

What difference has becoming a professional athlete made to your life?
Geoffrey Mutai: My family was not having much money, so my live changed a lot after winning the Monaco marathon at the beginning of my career. It motivated me to make more good results, so that I can support my family with the money I was making.

What do you think is the secret of Kenyan runners? Is it a genetic advantage, better training and environment for training, a cultural fighting spirit?
Geoffrey Mutai: I think it is because of so many young people try to make it as a runner and there are not so many other options for most of them in live. Also we have a running culture here in Kenya and if you want to make a career, running is something many others did with success.

What are you thinking during the race? Do you concentrate on your steps and your competitors or do you try to just focus on running from mile to mile? What do you think when a competitor runs past you and you can’t follow and what do you think when you pass somebody?
Geoffrey Mutai: In the beginning of the race I am concentrating on my own running and after some miles I start to look around who could be the strongest. When somebody is passing me, is just wait and see if he is opening up a gap. If he is opening a gap, I try to close it and stay behind him.

Who is the most important person for you?
Geoffrey Mutai: My family

With whom would you like to have dinner once?
Geoffrey Mutai: Barak Obama

What is your biggest wish accomplish in live?
Geoffrey Mutai: Winning two major marathons in one year

Do you like any other sport besides athletics?
Geoffrey Mutai: Football

Do you have a pet?
Geoffrey Mutai: Yes, a dog.