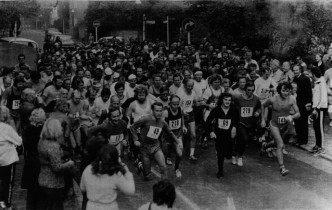 The start of the first Berlin people's marathon in 1974
© SCC

6 weeks long, we would like to put you in the mood for one of the largest marathons in the world – the BMW BERLIN-MARATHON. It will be a look behind the scenes, a glimpse of this mega event which is organized every year for the past 39 years.

The launch of the first "Berlin People's Marathon," fell on 13 October 1974. Back then, ​​286 runners, including a few female runners, started their 42km long way along the AVUS. The race was started at the Mommsenstadion, still training center and office of the Sport-Club Charlottenburg (SCC). Winner was the German Günter Hallas in 2:44:53 hrs, Jutta von Haase (also German) was the fastest woman in 3:22:01 hrs. A year later, the first and only couple in history ran for victory: Ralf Bochröder won after 2:47:08 hrs, his wife Kristin (both German) ran 3:59:15.

For the first time in 1981, the course was going through the city center of Berlin, which was well received by the 3486 participants. Already in 1985 the chief of the London Marathon Chris Brasher, said "the BERLIN MARATHON ascended to number five in the world."

Since 2003 the home stretch is passing through the Brandenburg Gate on the Straße des 17. Juni. This is a very special experience for every marathon finisher. In 2006, the five largest marathons in the world formed together to the World Marathon Majors (WMM). Among London, Boston, Chicago and New York is also Berlin.

More infos about the history of the BMW BERLIN-MARATHON can be found here.