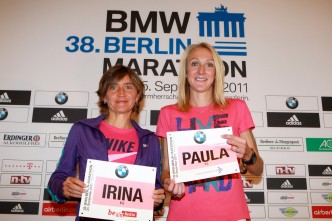 Irina Mikitenko and Paula Radcliffe with their bib numbers of the BMW BERLIN-MARATHON.
© Victah Sailer/photorun.net

It should be a match made in heaven, the women’s marathon world record holder finally running on the universally recognised fastest marathon course in the world. But it’s been two years since Paula Radcliffe ran a 42.195k race, finishing fourth in New York 2009, and, on her own admission today, “I was hurting”.

The fact that the IAAF is proposing (just two days ago) that that record now be considered a ‘world best,’ since it was paced by men, has not pleased her, although she still holds the ‘world record’ 2.17.52 from London 2005. But with two Olympic disasters behind the most accomplished women’s distance runner in history, and a need to run close to 2.20 here in Berlin, both to qualify her for London 2012, and to give her the springboard to a potential Olympic victory, it is not untoward to suggest that Sunday’s 38th BMW Berlin Marathon is going to be a (long) moment of truth for the 37 year old Briton.

Radcliffe cited injury and a then undiagnosed thyroid condition, following the birth of her second child Raphael a year ago, as reasons for her poor 10k in May, and has privately admitted to training to do 2.20 here. And on the evidence of previous events here – six world records in a dozen years – the course is the kindest that any marathoner is likely to encounter; the best example being Tegla Loroupe’s run in 1999 when, having reached 30k two minutes down on a really fast time, she astonished herself by taking seven seconds off her own world record.

At today, Thursday’s press conference, Radcliffe and Berlin race director Mark Milde reciprocated that they were both top of each other’s wish list. And given that Radcliffe spent some of her university year abroad in Germany, and is more than adequate in the language, she has already endeared herself to the population by fielding press and TV questions in the local lingo.

Victory on Sunday would only make things better on all fronts. “I’ve watched the race on television,” she said, “and I’ve run a little bit in Berlin in the past, so I’m really looking forward to the experience”.

With no mention of pacemakers, Radcliffe’s principal opponent here on Sunday morning is likely to be Kazakh born German Irina Mikitenko, who won both London and Berlin in 2008, and won again in London the following year. An injury forced her out of London last year but after struggling with injuries, she managed a time of 2:24:24 in London in April. Because of the extraordinary strong field that was only good enough for seventh.

But, like Radcliffe, she says that recent training has gone well, and at a year older, admits that the Briton had been an inspiration for her. “Seeing how Paula developed from the track to the marathon encouraged me to do the same, because we had raced on the track as youngsters.

“I’m really looking forward to running on Sunday since I always wanted to run against Paula in a marathon. Having Paula in the marathon will give the whole event a different atmosphere”.

The other contenders are all Russian – Lidiya Grigorieva, a winner in Boston and Los Angeles in the last five years, and Tatyana Petrova, who also won Los Angeles, two years ago.

On the ‘world record-world best’ debate, which is bound to run far longer than any marathon, Mikitenko came out a clear winner, when she said, “When I heard this, I thought it was a joke. How can you achieve something, then it is taken away from you years later?”

Radcliffe said that when she was accompanied by men in London 2003, she made a point of running beside them, and even competing with them, rather than following. “I honestly don’t think that running with men makes any difference. I would still have done in the 2.15s.

“It doesn’t matter much to me. You come for a race, and you don’t know how it’s going to go, but you just get on with it”. And as a preview of Sunday’s race, Radcliffe could not have been more positive.

The BMW BERLIN-MARATHON will be broadcasted live in more than 160 countries. In Germany n-tv will start its 4 hour live coverage at 8.30 am. International coverage is provided by Eurosport, BBC 2, Supersport, Al Jazeera, Sport 5 (Israel), Fuji TV (Japan), CBC (Canada), Sky Mexico, Globosat (Brasil) and by Universal Sports via cable as well as Webstream in the US.