Berlin is ready for another very fast men’s race, while Sabrina Mockenhaupt is the favourite in the women’s event 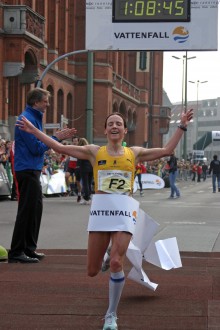 Renowned for super fast times and world records in road races, Berlin should see another high-class event this Sunday: The 31st edition of the Vattenfall BERLIN HALF MARATHON will feature a men’s race in which seven competitors have already run sub 61 minutes. Two of them have broken the prestigious one hour barrier. While there is no clear favourite in the men’s race it is different with the women’s event: Here Germany’s Sabrina Mockenhaupt is expected to take the race for a second time after 2009. A record number of 25,500 entries were accepted for Germany’s by far biggest and best quality half marathon. Around 200,000 spectators are expected to line the course through the centre of Berlin.

While the Kenyans Kiplimo Kimutai (59:44) and Leonard Langat (59:52) have achieved sub 60 minutes results Abebe Dinkesa (Ethiopia/60:03), the Kenyans Pius Kirop (60:04) and Abraham Chebii (60:07), Megersa Bacha (Ethiopia/60:27) and Joseph Ngolepus (Kenya/60:56) are the others competing with sub 61 personal bests. Another promising sign for Sunday’s race is that three of these runners – Langat, Kirop and Chebii – have achieved their personal bests this year, proving that they are in top form. “I think I am ready to break my personal best again on Sunday,” said Leonard Langat, who had clocked his PB when he placed third in the Ras Al Khaimah (UAE) half marathon in February.

But the runner with the fastest PB is also optimistic: “My brother told me to run in Berlin. He said it would not matter if I run the marathon or the half marathon, because in Berlin I would run fast anyway,” explained Kiplimo Kimutai, who is the brother of former Berlin Marathon champion Raymond Kipkoech. He won the race back in 2002 with 2:06:47.

Another one to be watched is Geoffrey Kipsang. The 18 year-old clearly is on his way to becoming the next Kenyan world-class runner. In March he took the IAAF World Junior Cross Country Championships in amazing fashion, running from the front right from the start. The Vattenfall BERLIN HALF MARATHON will now be his first major international road race. And Kipsang plans to make an immediate impact: “I think I can break 60 minutes on Sunday. Since January I knew that I would run this race so I have prepared accordingly.” So far he has run one half marathon in Kenya, clocking 62:04 minutes in the Masai Mara race.

In contrast to the men’s race there is a big favourite in the women’s event: Germany’s Sabrina Mockenhaupt will be hard to beat on Sunday. The 30 year-old hopes to improve her personal best of 68:45 minutes, which she set in winning the Vattenfall BERLIN HALF MARATHON two years ago. Since Mockenhaupt, who had placed third in last year’s event with 69:57, will not run a spring marathon so Sunday’s race will be her early season highlight.

Fate Tola (Ethiopia) looks likely to be Sabrina Mockenhaupt’s strongest rival. She had placed seventh in last year’s world half marathon championships, clocking a personal best of 69:38 minutes. But after her recent marriage she is said not to be in peak form yet. While Andrea Mayr should not be able to threaten Sabrina Mockenhaupt, the Austrian is said to be in fine form. The 31 year-old could be ready to improve her national record of 1:12:14 on Sunday.