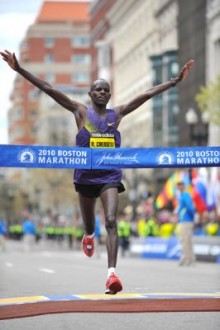 Robert Kiprono Cheruiyot of Kenya ran away from the field to set the Boston Marathon course record, and Teyba Erkesso of Ethiopia won by just three seconds in a thrilling women's finish, as the 2009-10 World Marathon Majors series resumed on a sun-splashed Patriots' Day.

Cheruiyot ran the course in a blistering 2 hours, 5 minutes, and 52 seconds, besting the mark of 2:07:14 set by Robert Kipkoech Cheruiyot (no relation), also of Kenya, in 2006. Ethiopia's Tekeste Kebede finished second, 91 seconds behind Cheruiyot, and defending champion Deriba Merga, also of Ethiopia, took third in 2:08.39.

U.S. Olympian Ryan Hall and 2009 ING New York City Marathon champion Meb Keflezighi, both of Mammoth Lakes, CA, made a strong showing for the United States by finishing fourth and fifth. Hall's time of 2:08:41 is the fastest ever by an American at Boston, eclipsing Bob Kempainen's 2:08:47 from 1994. Keflezighi clocked 2:09:26.

Erkesso made a break near the halfway point and had built a lead of more than two minutes late in the race, but Tatyana Pushkareva of Russia pulled close in the final mile. Erkesso held on to win in 2 hours, 26 minutes, and 11 seconds, just three seconds ahead of Pushkareva. Defending champion Salina Kosgei of Kenya outsprinted Waynishet Girma of Ethiopia for third place.

The World Marathon Majors points races have tightened up with the addition of the Boston results. The current 2009-2010 standings are: