Haile Gebrselassie plans to come back to the real,- BERLIN-MARATHON in 2010 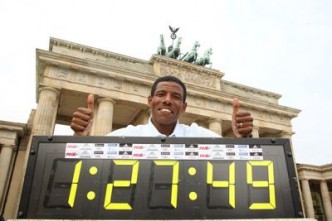 When you’ve broken 27 world records, the most recent being the 30k en route to his fourth consecutive victory in the real,- BERLIN-MARATHON on Sunday, publicity tends to take care of itself. But Haile Gebrselassie has shown his African colleagues just how to succeed in self-promotion too.

Of course, it helps to have such a genial personality, but that perma-smile, his success in learning English, and his endless availability, to fans and media alike have all made him the biggest success story in athletics during the last 20 years. Which made his reticence seem a bit curious, when someone asked him at his pre-Berlin press conference, about his latest business venture in Ethiopia – a resort complete with running trail. Maybe he was just a little embarassed.

He shouldn’t be. Which is why, when your correspondent caught up with him after the race, some more info was in order. That I pass it on to you has nothing to do with the free room he offered, “for the first night”. Because the offer is open to anyone in the running community who wants to visit there, when the resort opens in the New Year, 2010.

But first, the latest world record. He knew he’d been close to the 30k world mark (1.28.00) in a couple of his recent marathons, Berlin last year, and Dubai this year, albeit no one had been on hand to time it officially. But when he announced that he wanted to got through 30k on Sunday in 1.27.45, the men with stopwatches were duly posted. His 1.27.49 is awaiting ratification, AIMS course measurer Hugh Jones has already checked and confirmed that the timing at the 30 k point was correct.

In the meantime, at Monday morning’s post-race conference, he mused, “I want to break at least 30 records in my career”. The ones he has targeted are his own one-hour and 20,000 metres records, which he feels he can beat by, “at least 200 metres, and half a minute”. The other might be a bit more difficult, the half-marathon has been ‘borrowed’ by Olympic marathon champion, Sammy Wanjiru, with 58.33.

But he remained, “a little bit in confusion,” as to why his marathon record attempt fizzled out so spectacularly on Sunday. Close to 40sec up at 33k, on the pace which took him to the current record of 2.03.59 in Berlin last year, he finished in 2.06.08, a victory sure enough, but good only for the 26th fastest in history. “It’s the last part I don’t understand,” he admitted. “That was the pace I wanted. Normally at that part of the race, it’s acceleration, but relaxed. But I couldn’t relax, the sun was burning my head. After 30k, all the shade is gone. Maybe it’s because the race was one week earlier, the sun was stronger. But that’s no excuse, I can’t complain about the weather, the pacemakers did their job perfectly. I’ll just go back home and prepare for my next race”. Which is a half-marathon in Portugal at the end of October, and the likelihood of the Dubai Marathon in mid-January.

Which is around the time he’ll be opening Haile Resort in Hawassa, south Ethiopia. The town already a tourist destination, is around 270k, or a three-hour drive south of the capital Addis Ababa. Also spelled Awassa, the town also boasts an airport. “It took two and  a half years to build,” says Haile, “there are 120 rooms, with pools, gym, a mini-golf, but also a 600 metres running trail. It’s a big compound, with wild animals outside, lions, elephants, giraffes, camels, leopard, cheetah. It’s very different from Addis, the people are different, very open, friendly, for example, you never see a woman even riding a bicycle in Addis. In Hawassa, they ride motorbikes. If I want to relax, I always go to Hawassa.

But the last word, as ever was from Haile the runner. “I don’t run just for the money, I could earn money from my businesses (also car dealerships, movie houses, property). You have to believe how much it hurt to run the last two, three kilometres yesterday. But running is still number one in my life. Running remains something I do every day. It’s part of my life.” Next year, he said, he wants to come back to the real,- BERLIN-MARATHON once again. “It would be great if I could run a Berlin Marathon every month, but unfortunately I will have to wait twelve months.” 26th September 2010 is the precise date of the 37th real,- BERLIN-MARATHON.