Haile Gebrselassie returns to his "own" marathon in Berlin 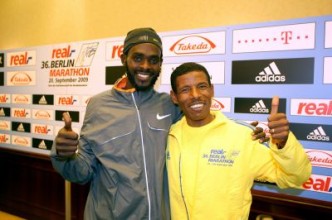 At an age when most successful athletes might prefer to slump in front of the television, rather than thrash out another 20k (at altitude); or at best, hold the stopwatch while someone else goes through their paces, Haile Gebrselassie lines up on Sunday, in an attempt to win the real,- BERLIN-MARATHON for the fourth year in succession.

As he put it at Friday’s press conference, “This looks like my own marathon”. When someone mentioned the crowds that Usain Bolt attracted to the Olympiastadion here for last month’s world championships, he took a sly dig at the Jamaican superstar. “He brought 60,000 people to the stadium in Berlin , I’ll bring a million to the streets”.

But it was all done with his inimitable good nature. And given that the 36 year old Ethiopian has set a world record in each of the last two years, if he makes it a hat trick of records to go with the four aces of victory, he’ll get the keys to the city as well as a piece of the old Wall. His extraordinary logevity was underlined when he reminded us that he first raced in Berlin 18 years ago, just two years after the fall of the Wall.

There are good reasons to expect another superlative performance on Sunday. First, there have been six world records set on the superfast Berlin course in the last decade. Second, and more importantly, never one to shirk a new challenge, Haile lines up against Duncan Kibet, one of only two men to get within half a minute of the new world mark of 2.03.59 that Geb set in the German capital a year ago.

Kibet, 31, won the Rotterdam Marathon in April this year in 2.04.27, just one second slower than the time that Geb himself ran in Berlin two years ago. So yet again, Haile will have to prove himself against one of his East African neighbours, if he is to stay at the top of the marathon tree.

And he is made constantly aware of the East African rivalry. Informed last Monday that seven Kenyans had run under the once formidable one-hour barrier for the half-marathon, in Rotterdam , all he could say was,”My God, the Kenyans have a big running factory”. Suggest that he and his Ethiopian colleagues don’t do too badly in the distance running domain, and he replies, “It’s nothing like as many as in Kenya”.

Sure enough. First it was Paul Tergat on the track, and later with the Kenyan’s own world record 2.04.55 on the same Berlin course in 2003, that propelled Gebrselassie to greater heights. And last year, it was arguably the close attentions of the then little known James Kwambai in the latter stages of the race, which helped Haile to the first sub-2.04. Having dropped Abel Kirui (recent winner of the world title, in Berlin ) at 35 kilometres , Geb thought he was out on his own. Until Kwambai appeared on his shoulder, and provoked a double take from the Little Emperor that had the TV watching public roaring with delight. Kwambai lasted another couple of kilometres, just enough to ensure that sub-2.04 for Haile.

After that breakthrough, Kwambai, who is a training partner of Kibet went on to clock the same time as his pal, for second place in Rotterdam . And Kwambai was third in that Rotterdam ‘half’ in 59.09 last weekend. Kibet said on Thursday that he thinks that he is currently at least at the same fitness level currently as Kwambai. And since Geb said on Friday that his training has gone perfectly, it looks like we are in for a burn-up in Berlin on Sunday morning. Unfortunately, the record may not go to either man, since Old Mister Sun is predicted to clock in with temperatures rising to 25 or 26C ( 79F ).

Haile is undeterred. “Warm weather is hard for long distance runners, last year was perfect (12- 16C). But I don’t want to be slower than 61.30 at halfway (compared to 62.04 last year), and would like to run 30k faster than last year”. His 1.28.25 last year was close to the world record for 30k, and just in case, (and another measure of his confidence) there will be official timekeepers there this year. One advantage is that the second half of the course has a lot of shade.

Apart from naming his time schedule, he was as equivocal as Kibet the previous day about his principal opponent. “This is a marathon, you run against the distance, not the competitors, the distance is the most important. And I can’t just think about Duncan Kibet, there are others too”.

Second to Irina Mikitenko’s sub-2.20 last year, which secured the Kazakh-born German the Marathon Majors’ half million dollars jackpot, Askale Magarsa of Ethiopia should have the women’s race to herself this year.

The event itself goes from strength to strength, the 40,000+ entries were snapped up earlier than ever this year. This is the 36 th annual race, and the 20 th anniversary of the first time the race went through the Brandenburg Gate and into the old East Berlin . Nowadays, the finish line is just beyond the landmark. As Gebrselassie said, “When you see the Brandenburg Gate, you know it’s the end of the race".

The final hours before the start: Haile TV at www.real-berlin-marathon.com

On Haile TV one is now able to follow Haile Gebrselassie during the final hours before the start at 9 am on Sunday. This is shown on www.real-berlin-marathon.com. Since his arrival at Berlin Tegel airport on Friday morning the camera is following the Ethiopian, showing his final preparations for Sunday’s race. During the time until the start there will be different sequences shown on Haile TV.