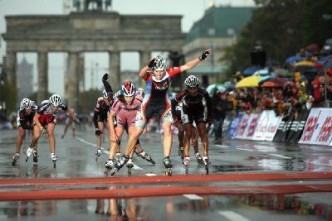 The wet and rainy course could not hinder them: Nicolas Iten from Switzerland and Hilde Goovaerts from Belgium captured victory at the world’s largest inline marathon in Berlin. Despite the pouring rain, about 150,000 spectators lined the course and cheered on the just-for-fun and pro skaters.  The race was a success from a medical standpoint as well: There were considerably less injuries than in the years prior.

From the beginning on, the men’s race was full of excitement. The men started out with a fast pace from the beginning, and numerous attempts to break away added speed. Roger Schneider was the first one to get away in a promising solo attempt.  The field was only able to catch up again when the Swiss racer fell.  The race further developed with a leading group that included Nicolas Iten (SUI), Peter Michael (NZL), Roger Schneider, Massimiliano Presti (ITA) and Claudio Naseli (ITA). “Everything was in sync with us in the leading group.  It was helpful to have a good skater from every team in the leading group, so that the danger from behind was not so great,” said Iten.  The closer they got to the finish, the more unsettled the leading group became. Nicolas Iten was best able to take advantage of the situation. “Four kilometres before the finish, I attacked in the curve.  The other skaters couldn’t make up their minds, so I quickly gained a lead of 60 metres, which I was able to hold on to through the finish,” the Swiss skater explained enthusiastically, who finished the marathon in a time of 1:12:30. Five seconds behind Iten, shooting star Peter Michael from New Zealand crossed the finish.  Only 17 years old, the youngster had already made a name for himself by winning the World Inline Cup race in Engadin. Coming in third was Roger Schneider, who also clocked a time of 1:12:35, ahead of the World Cup overall champion, Massimiliano Presti.

“It really was a very hard race, but the rain was to my advantage. I am normally not so fast at the final sprint,” said  Hilde Goovaerts of Belgium after the race. It was her seventh time competing in Berlin, but she had not yet achieved victory in the German capital.  Second-place Sabine Berg from Gera, Germany, also profited from the conditions.  It was also an extraordinary accomplishment for the only 17-year-old, especially since she had only raced in one other World Inline Cup event. “I always do well in the rain; my last marathon races were in the rain as well.  You have to take extra care not to crash,” Sabine Berg said after the race. Laura Lardani from Italy was the third woman to cross the finish.  This third place finish secured her the title of overall World Inline Cup champion.  “Our teamwork was very good. We all worked hard together to be in the front, and we succeeded. Naturally, my third-place finish was important for the overall ranking, but I also would have liked to have won,” said the Italian after the race. The fastest woman from Berlin to finish was Jana Gegner in 19th place.

Marathon broadcast live on TV for the first time