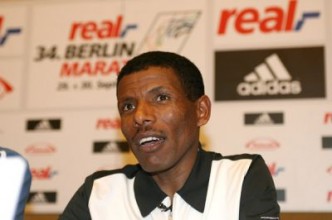 Ambition is a fine thing. And it’s even finer when the person harbouring the ambition has the talent and drive to achieve it. Haile Gebrselassie doesn’t lack any of the aforementioned attributes, but he’s always been cautious about announcing targets in such a precarious event as the marathon, the more so when his record at 42k has been somewhat less auspicious than the rest of his illustrious career. But when the 34 year old superstar turned up in Berlin a few weeks ago to announce the defence of his real,- BERLIN-MARATHON title this Sunday, the diminutive Ethiopian was tempted to reveal something that he has kept to himself until now.

Asked to contribute to his shoe sponsors´ latest promotion, he sketched a stick figure (of himself) on a drawing board, and wrote underneath, '2.03.00 - I will show you'. So, there we are. Or rather, there he would like to be. And who are we to argue? One who might argue is Geb's great friend and rival, Paul Tergat. The one arena where the Kenyan has beaten Geb - having failed in two of the great Olympic 10,000 metres races in history (1996 and 2000) - is in owning the marathon world record, 2.04.55, on this same Berlin course four years ago. Geb could do no better than 2.05.56, when he won last year, 61 seconds off the pace.

At Friday’s press conference, immediately following his arrival from his European base in the Netherlands, he freely admitted that, yes, he was here to chase the world record on Sunday morning, but that the 2.03 was, well, maybe overstating the case. “To write is easy, to do is not so easy,” he said. “But it’s Berlin, it’s a fast course, I will try. I had a problem with the last five kilometres last year. I was by myself, and I was tired. So I’ve done a lot of endurance training, more long distance. I don’t think I’m losing any speed. But to write is easier than to run”.

Gebrselassie has run 23 world records since his electrifying international debut, winning the 5000-10,000 metres double at the world junior championships in 1992. His most recent world records were the 20k and ´one-hour´ on the track in Ostrava, Czech Republic four months. They put him back on track, so to speak after one of the biggest set-backs of his career. Prior to the Flora London Marathon in April, one of his other Kenyan rivals, Felix Limo said, “I don’t fear Haile. He can only run well by himself with pacemakers”. The implication being that in a competitive field, Geb could not, well, compete! And so it seemed.

His three marathon triumphs, in Amsterdam 05, and Berlin and Fukuoka 06, albeit all very fast, had all come in solo paced races, whereas on his debut in London 2002, he had finished third (behind Khalid Khannouchi and Tergat). In London 06, he was ninth, then, after Limo’s pre-London prediction this year, Geb dropped out. But, following tests, he discovered his breathing difficulties were due to previously unacknowledged allergies. “That’s a pity, because that means I can’t run London again in the Spring,” he said after his recent records in Ostrava. “But,” he quickly added, “that doesn’t mean I won’t run the marathon in London 2012 (Olympics). That will be in summer. No pollen!”

And so to Sunday! He will be paced again, by a string of Kenyans, including Boston 02 and New York 02 winner, Rodgers Rop, who is preparing for New York in five weeks´ time. But Geb should be accompanied for a good part of the race by yet another Kenyan, Philip Manyim, who won Berlin two years ago. Geb hopes so. “It’s really important to have someone else there, especially in the last part, to pull or push you. It’s not just competition, it’s help”. As for Manyim, he raised the biggest laugh of the day with his observation on that potential scenario. “When Tergat set the world record here, he ran the first half in 63 minutes,” said Manyim. “If he (Geb) starts at a slower pace than last year, I think he can get faster at the end. But if the pace is too high, I’m sorry, man!”

Geb pointed out that he has been running in Berlin since 1991, and never lost, “It’s my luckiest city. And I’ll be back in 2009 (World Championships), serious!” But pressed again on a potential world record, he insisted, “The marathon is the only distance I can’t talk about a world record. I’ll tell you after I’ve done it”. You’ll probably know the unattributed quote, ´Life’s battles don’t always go to the strongest or fastest man, but soon or late, the man who wins is the man who knows he can´. Well, Geb is already the strongest but not quite yet the fastest. But, soon or late, and maybe as soon and as late as Sunday, he sure knows he can.