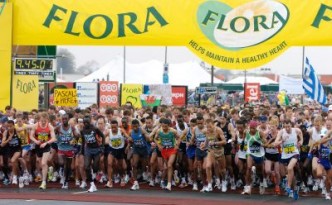 A course record, nine national records, and some of the most exciting finishes in recent memory highlighted the inaugural season of the World Marathon Majors Series. Launched in 2006, the WMM united the world’s most prominent marathons—Boston, Flora London, real,-Berlin, The LaSalle Bank Chicago, and ING New York City—in a two-year series. As the world’s top marathoners vied for the early WMM Series lead, 45 athletes earned points—and positioned themselves for a run at their share of a $1 million prize which will be split between the top man and woman following the 2007 ING New York City Marathon.

“The introduction of the World Marathon Majors Series has been a historic development for our sport,” says David Bedford, Race Director of the Flora London Marathon. “Now that the second year is beginning, we are seeing that our top athletes are embracing the idea of the World Marathon Majors, as eight of the top nine women and seven of the top nine men will be competing in Boston and London this month.”

On the eve of the 2007 season, 26 athletes from the WMM Series leaderboards are preparing to run one of the spring races, either Boston or London. Included in that group are the current leaders, Robert K. Cheruiyot and Jelena Prokopcuka, both of who will be returning to Boston in hopes of building upon their leads. Still other athletes are hoping to earn their first WMM points.

“For 12 months the spotlight has been shining on these five races, and the incredible athletes who compete in them,” says Guy Morse, Executive Director of the Boston Marathon. “We can’t wait to see how the World Marathon Majors story continues to unfold on April 16, whether it’s Robert and Jelena extending their leads, or new stars emerging to challenge them.”

The women’s field is the story in Boston this year, with three of the top five athletes on the leaderboard scheduled to compete: Jelena Prokopcuka, Rita Jeptoo, and Deena Kastor. Jeptoo beat Prokopcuka by 10 seconds last year, in what was the closest finish in the history of Boston’s women’s division. Prokopcuka evened the score in November, beating Jeptoo and Kastor to capture her second straight ING New York City Marathon crown. Boston won’t be just a three-woman race, however, as Madai Perez Carrillo returns to action after her Mexican-record 2:22:59 fourth-place finish at The LaSalle Bank Chicago Marathon last fall.

Though Prokopcuka is the current WMM Series leader with 40 points, Jeptoo (30 points) and Kastor (25 points) could quickly erase that lead with strong Boston showings.

On the men’s side, Cheruiyot and 2006 runner-up Benjamin Maiyo will reprise their rivalry. Maiyo led for much of last year’s race, pulling the pack well under course record pace before Cheruiyot seized the lead—and the 25 WMM Series points at stake. This year Maiyo will be joined by his teammate Stephen Kiogora (second at New York last year), as they try to chip into Cheruiyot’s WMM lead.

Cheruiyot was, remarkably, the only male athlete to score in two WMM events in 2006, as he also became the first man to win the Boston and Chicago titles in the same year. Already the owner of a 25-point lead, a win in Boston would put Cheruiyot in a commanding position heading into the fall season.

Once Boston’s champions have been crowned with the traditional olive wreath, all eyes will turn to London where an impressive list of 17 athletes from the WMM Series leaderboard—including five 2006 champions—will be competing in London this year.

Berhane Adere, fourth in London last year before she won The LaSalle Bank Chicago Marathon in the fall, leads the women’s field. She currently sits in second place on the WMM leaderboard, 10 points behind Prokopcuka, but she will have plenty of company. Looking to challenge Adere—and gain ground on Prokopcuka—will be defending Berlin champion Gete Wami, Chicago runner-up Galina Bogolomova, London runner-up Ludmila Petrova, and Berlin runner-up Salina Kosgei. In search of their first WMM points will be two of only eight women in history to break 2:20:00: Mizuki Noguchi (2:19:12) and Chunxiu Zhou (2:19:51).

The men’s field is led by three 2006 champions: Felix Limo (London), Haile Gebrselassie (Berlin), and Marilson Gomes dos Santos (New York City), each tied for second place on the WMM leaderboard. Martin Lel, second to Limo in London last year, sits in fifth on the leaderboard, while Meb Keflezighi (third in Boston last year) and Hendrick Ramaala (third in London last year) are just five points back of Lel in 10th. Three of the most decorated entrants in London this year have a lot of ground to make up if they are to catch Cheruiyot: Current and former world-record holders Paul Tergat and Khalid Khannouchi have 10 and five points respectively, while Olympic gold medalist Stefano Baldini is in 20th place with one point.

Following Boston and London, the World Marathon Majors Series will resume with four events in the summer and fall. The remainder of the 2007 season is:

While much will be determined on the roads of Boston and London, the inclusion of the IAAF World Championships on the 2007 schedule adds an additional element of strategy to the Series. For the first time, athletes could be in a position to compete in three WMM events in a year. Historically, this has been done before, most recently Catherine Nderba in 2003 and Constantina Tomescu-Dita in 2005. In total, eight women have placed among the top five in three WMM events in single year, however no man has ever accomplished that feat.

While the success of the inaugural World Marathon Majors Series can be seen on the leaderboard, the WMM events can be judged on other levels as well. In 2006, the five WMM events boasted 154,596 finishers, 6.6 million spectators, and a worldwide television audience of 250 million viewers. Additionally, they combined for an overall financial impact of $400 million, while raising $110 million for charity.