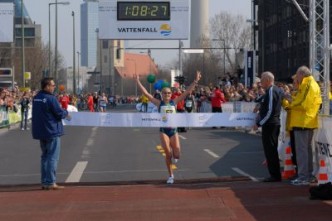 In the women’s race Australian Benita Johnson won in 68:28 minutes. She was ahead of Irina Mikitenko (69:46) while another German, Luminita Zaituc, took third in 71:56. Defending champion Edith Masai (Kenya) had to be content with fourth place, clocking 72:03. Both Zaituc and Masai suffered of stomach problems.

In good but warm weather conditions organiser SCC-RUNNING registered a record field of 22,048 athletes from 70 nations. 150,000 spectators were watching the race lining the streets. Last year 20,419 athletes were registered. The total number is split in 18,531 half marathon runners, 1,711 inline skater, 22 handbikers and nine wheelchair athletes. Additionally 747 athletes participated at the Vattenfall RUN-RUN at a 3,5 km distance. 401 nordic walkers (6,8 km) as well as 536 kids and 91 kids skaters were partcipating. 2,016 runners came from abroad.

But due to the high pace the leading group was reduced to four runners soon after that. Makau Musyoki, Cheruiyot, Kibiwott and Ethiopian Eshetu Wondimu, who later finished fourth (60:08), were those at front. The pace slowed and Sammy Wanjiru’s world record of 58:35 minutes seemed to slip out of reach at 15 k (41:46). But that changed again, when Makau Musyoki decisively broke away at 16 k by increasing the pace again. He clocked 2:42 between 16 and 17 k. But in the final stages of the race there was a head wind which slowed the the race.

In the women’s race the expected duel between Benita Johnson and Edith Masai seemed to develop right after the start. Running a fine pace The Australian passed the 5 k mark in 16:03 with Masai following her. It looked the same as a year ago when Kastor lead Masai, but the Kenyan passed her in the middle of the race to clock a course record of 67:16. But this time it was not to happen. At 9 k Masai dropped back while Johnson had a lead of eleven seconds already at 10 k which she passed in 33:20. And it was Mikitenko who had conquered second place at that time. Masai was a further four seconds behind the German, who clocked her first sub 70 minute times.

There were no changes in the first two positions from this point on. But due to the partial wind during the second half of the race Benita Johnson could not hold on to her pace as well. She passed 15 k in 48:33 minutes. “I am happy with my result and I very much liked the race and the support of the spectators. But it was a bit windy in the last part otherwise I could have gone faster”, Benita Johnson said. Originally it had been her goal to break Kerryn McCann’s Australian record of 67:48 minutes. “I am a bit disappointed to have missed this and my personal best of 67:55 – but it is great to have won this race”, Benita Johnson said. Looking ahead to the London Marathon in three weeks she said: “I know this is a very strong field and one has to be able to run sub 2:20 to win. But I think I can do this.”

Though suffering of stomach problems herself Luminita Zaituc managed to overtake the defending champion Edith Masai shortly before the finish. “I am really happy with a thrid place today”, Zaituc said. She will run the Düsseldorf Marathon on 6th May.