Kenyans chase world-class times in the Vattenfall Berlin Half Marathon 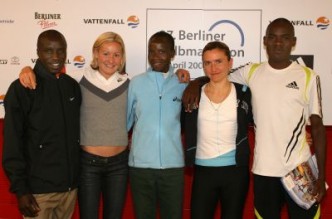 “I want to clock 58 minutes on Sunday,” said Patrick Makau Musyoki.The Kenyan is the fastest man in the field. In February he improved to run 59:13 in finishing second in the Half Marathon in Ras Al Khaimah (UAE) and that performance made the 22-year-old the fastest runner on the start list. What’s more, he is only six seconds short of the course record of 59:07 set by Paul Kosgei (Kenya) in 2006. Asked whether he’s going for the current world record of 58:35, Patrick Makau Musyoki replied: “Maybe. I think that if the Kenyans work together and help each other, we could run very fast.” Four Kenyans with personal bests under 61 minutes will be on the start line in Berlin.

The German woman most likely to produce the strongest performance is also going for a personal best: Irina Mikitenko (TV Wattenscheid) has been concentrating on the longer distances on the road for more than a year: “I definitely want to run under 70 minutes,” said Mikitenko, whose fastest time to-date is 70:03.