Kenyans Cheruiyot and Taragon return to the Vattenfall BERLIN HALF MARATHON 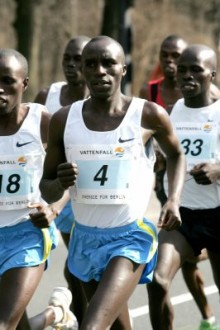 Evans Cheruiyot will return to the Vattenfall BERLIN HALF MARATHON. Last year he finished second.
© www.photorun.net

While it had been announced just a couple of days ago that the defending women’s champion Edith Masai (Kenya) will return to the 27th Vattenfall BERLIN HALF MARATHON on 1st April Race Director Mark Milde signed three more Kenyan athletes. Among them are Evans Cheruiyot and Wilfred Taragon who had placed second and third in last year’s edition of Germany’s biggest and best quality half marathon. Additionally Francis Kibiwott will run in Berlin, where a total of more than 20,000 athletes are expected to take part in various events.

„We are happy to see Evans and Wilfred returning to the Vattenfall BERLIN HALF MARATHON. We already had signed a superb women’s field, which will be led by Edith Masai and Benita Johnson. Now we can expect a high-class men’s race as well”, said Mark Milde, who is still negotiating regarding further amendments to the men’s field.

A year ago Evans Cheruiyot had clocked 59:29 minutes on the fast Berlin course when he finished second. With this personal best he is still among the fastest runners ever at the distance. This year Cheruiyot has already won the half marathon in Cosmo (Puerto Rico). Wilfred Taragon, who had been third in 60:46 at last year’s Vattenfall BERLIN HALF MARATHON, has shown fine form recently as well. The 21 year-old Kenyan won the Suwon Half Marathon in Korea.

Francis Kibiwott will be another favourite in Berlin. He clocked a great personal best at the half marathon in Ras Al Khaimah (United Arab Emirates), where he finished fourth in 60:08. It might well be the goal for the 28 year-old to break the hour on the fast Berlin course.

Additionally it will be interesting to see what Christian Belz will be capable of. The Swiss national record holder at 10,000 m will run his debut on 1st April. The 32 year-old had been fourth in the 10,000 m final of the European Championships last year. In Switzerland there is hope that he will do very well in the half marathon and marathon in the future.