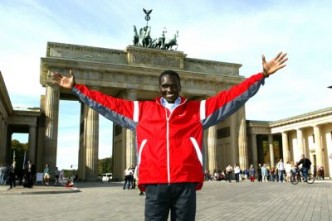 Some of the world’s greatest marathon runners will go head-to-head in a battle for the 2007 men’s Flora London Marathon title on Sunday April 22nd. Last year’s fastest marathon runner Haile Gebrselassie will take on his great rival and world record holder Paul Tergat of Kenya, plus Italy’s Olympic Champion Stefano Baldini, Morocco’s double World Champion Jaouad Gharib, and the reigning London champion Felix Limo of Kenya, in one of the highest quality men’s fields ever assembled for a major city marathon.

“We are delighted to have such a strong field for the men’s elite race again this year,” said Flora London Marathon Race Director David Bedford. “The presence of the world record holder, the World and Olympic Champions, our reigning champion and the in-form Haile Gebrselassie will, I am sure, mean we have another hugely exciting race through London's streets.”

Gebrselassie returns to London 12 months after finishing a disappointing ninth in the 2006 race but on the back of some highly impressive form in the latter part of last year. The Ethiopian – a double Olympic and four-time world 10,000 m champion – recorded a personal best of 2:05:56 to win the real,- BERLIN-MARATHON in September, making him the fifth fastest of all time, and also won the Fukuoka Marathon in December.

Tergat set his world record of 2:04:55 in Berlin in 2003 but was forced to pull out of the London Marathon last year after sustaining an injury just a few days before the race. The 37-year-old, who finished second in London in 2001 and 2002, will meet Gebrselassie over the marathon distance for the first time after a track rivalry that stretches back to the 1993 World Championships in Stuttgart.

But these two will certainly not be the only contenders. Limo proved last year that he is a hard man to beat as he added the London title to previous victories in Rotterdam, Berlin and Chicago, and this year he will aim to become the first man since Mexico’s Dionicio Ceron in 1996 successfully to defend the men’s London Marathon crown.

Fifth last year, Baldini will be full of confidence for his eighth appearance in London after adding the European Championship title to his 2004 Olympic crown last summer, while Gharib will be hoping to improve on finishing second in 2005 before he defends his World Championship title in Osaka in August.

The addition of South Africa’s Hendrick Ramaala, who was third last year, means that the top five finishers from 2006 return to contest the 2007 race.

The British challenge will be led by Jon Brown, who has twice finished fourth at the Olympic Games. Brown was forced to miss last year’s race due to injury but returns to the London field hoping to improve on his sixth place finish in 2005.

As well as chasing prize money and record bonuses totalling more than $250,000, the competitors in this year’s race will also be fighting for points towards the World Marathon Majors (WMM) series. The other WMM races this year are the Boston Marathon (April 16), the real,- BERLIN-MARATHON (September 30), the LaSalle Bank Chicago Marathon (October 7), and the ING New York City Marathon (November 4), plus the IAAF World Championship marathon races in Osaka (August 25 for men and September 2 for women).