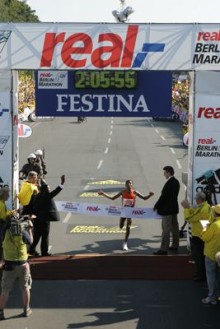 Haile Gebrselassie won the 33rd real,- BERLIN-MARATHON in the German capital Sunday morning. But what looked until the closing kilometres like a successful assault on his great rival Paul Tergat’s world record of 2.04.55, set in this same race in 2003, evaporated, and the tiny Ethiopian finished one minute and one second behind the Kenyan’s time, with 2.05.56. The race was run in bright sunshine throughout, with temperatures rising from 16C (59F) at the 9am start, to more than 20° C (68F) at the finish. 31,472 runners from 105 nations competed in the race in front of one million spectators.

Any chance of breaking the record was lost between 35 and 40k. Going into the last seven kilometres, Gebrselassie was 22 seconds up on Tergat’s time, with two kilometres to go, he was 22 seconds down. It was impossible to recoup the deficit. In any case, he was suffering, and when he finished, lifted a left foot in some discomfort.

His time was nonethless a personal best for the 33 year old, beating the 2.06.20, set in similar circumstances in Amsterdam a year ago. In the Netherlands, he was also well up on Tergat’s record until the closing stages. Here in Berlin, there were two factors militating against Gebrselassie. Like Amsterdam, he was on his own for the last 14 kilometres, whereas Tergat was first headed until 41k, then chased right to line by Sammy Korir three years ago. Gebrselassie also had to cope with a fluctuating wind. Korir, incidentally dropped out this year at 26k.

Korir, 34, had been widely tipped to challenge the Ethiopian for victory, and the second fastest man in history, with his 2.04.56 behind Tergat in 2003, began well. He traded strides with Gebrselassie throughout the opening 15 kilometres, but then started to falter. He dropped back at 19 kilometres, had a brief rally shortly afterwards, but when Gebrselassie disppeared with pacers, he lost heart and dropped out at 26 kilometres. The crunch began for Gebrselassie when his Kenyan pace-makers, Jason Mbote and James Kwambai dropped out at 25 and 28 kilometres respectively.

So, with two years to do until his predicte retirement following the Beijing Olympics, Gebrselassie stays on 21 world records broken, compared to the 23 by the immortal ‘Flying Finn’, Paavo Nurmi. But it was a measure of the conditions in Berlin that the runners-up finished way behind the Ethiopian star. His colleague, Shentema Kudama was second in 2.10.43, with Japanese, Kurao Umeki third in 2.13.43.

Just like in the men’s race, the predicted Ethiopan-Kenyan duel in the women’s race evaporated at 19 kilometres, when Salina Kosgei dropped back, and left the field to Gete Wami. The former 10,000 metres world champion from 1997, profited from the pace-making of Kenyan, Christopher Kandie, who had been instrumental in helping Paul Radcliffe to the world record of 2.15.25 in London 2003. Wami was never going to challenge that time, but the Ethiopian won as easily as her compatriot, finishing in 2.21.34, also breaking her personal best of 2.22.19, set in her winning debut in Amsterdam in 2002. Kosgei was second in 2.23.22, also a new personal best, bettering her 2.24.32, which was also a winning debut in Paris 2004. Third was Monica Drybulski of Poland, in 2.30.12.