Haile Gebrselassie welcomes World Marathon Majors idea prior to his start at the real,- BERLIN-MARATHON 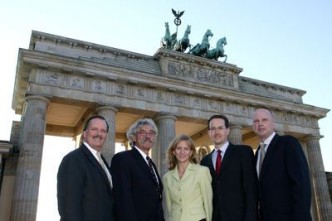 The World Marathon Majors, the union of the top five global marathons, will get a boost in class and recognition if Haile Gebrselassie wins the third race in the series, the real,-BERLIN-MARATHON on Sunday morning. The Ethiopian track star, who has broken 21 world records in his long career sets out in his fourth marathon on the course where his great rival, Paul Tergat of Kenya set a world record of 2.04.55 three years ago.

With the marathons of Boston and London already decided in April, with New York and Chicago to follow Berlin in Autumn, two Kenyans, Robert Cheruiyot and Felix Limo top the WMM men’s leaderboard with 25 points each, in the overall race to win an extra $500,000 for topping the table at the end of the inaugural two-year period of ten races, plus next year’s IAAF World Championships in Osaka, Japan.

Rita Jeptoo of Kenya, who won in Boston, and Deena Kastor of the USA, who won in London top the women’s leaderboard, with Gete Wami of Ethiopia and Salina Kosgei of Kenya favourites to join them after Berlin. The women’s winner will also receive $500,000 after the end of the first series.

Gebrselassie, 33, also has tough opposition in the men’ race. He faces another Kenyan, Sammy Korir, who finished a close second, in 2.04.56, to his colleague Tergat in that world record race in 2003. Gebrselassie welcomed the inauguration of the WMM series at a reception in Berlin last night (Friday), saying, “This World Marathon Majors idea is wonderful, athletes always want to do something special, myself included. I’m looking just to do this kind of thing”.

Mary Wittenberg, the New York race director said, “I think there is a mystique to the marathon that makes it better than any event in the world, what we are all trying to do is add as much glory as we can to guts and determination that it takes to win one of these majors”.

Mark Milde, race director of the real,-BERLIN-MAARATHON looked to the future for the WMM series, saying, “Now we have established this race series for the elites, but we plan to include initiatives for the mass runners in future”.

Release prepared by Pat Butcher for the WMM

Currently, positions on the leader board are as follows:

The first five male and female runners across the line in each World Marathon Majors race score points as follows:

Standings, breaking news and further information about the World Marathon may be found at www.worldmarathonmajors.com .