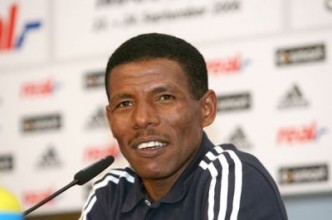 If silence speaks louder than words, then Haile Gebrselassie may finally come to terms with the ultimate long distance race, when he runs in the real,- BERLIN-MARATHON on Sunday morning. By anyone else’s standards, the Ethiopian star’s first two marathons – a third in London ’02 in 2.06.35, and a win in Amsterdam ’05 in 2.06.20 – were top drawer. But his ninth place in London, in 2.09.05 six months ago was, as he admits, a disaster, albeit one he felt he could explain. Nevertheless, for a man who has set 21 world records in his career, running on this notoriously fast Berlin course, the inevitable question is, can he beat the 2.04.55 world record set here in 2003, by his erstwhile rival, Paul Tergat of Kenya, a man who never beat Geb on the track?

Yesterday’s pre-race press conference was no more revelatory than his visit to Berlin a month ago, to promote his participation in the 33 rd running of the event. The broad smile was there, the wise-cracks were still there, particularly, “I feel sorry for the joggers,” when told that the temperature would rise to the mid-20s celsius (mid-seventies Fahrenheit), after his expected finish. But, as to what we can expect for a man who is just two superlative performances short of the immortal Paavo Nurmi’s 23 world records, Geb was resolutely quiet, saying simply, “Let’s wait and see”.

The weather forecast, bright and sunny, was his best news. Marathon runners usually prefer around 12 degrees celsius, even with a light rain. But, says Geb, the rain was his undoing in London. Everyone can see that the Ethiopian, unusually for a long distance athlete, runs on his toes. Doing so in the rain that fell on the London race in April gave him huge problems. “The rain made the road slippery, and running on my forefeet, even before 25k, my legs were tired. I prefer this kind of weather”.

Sammy Korir of Kenya is expected to be his closest rival on Sunday. Korir, 35, finished a stride behind his compatriot Tergat three years ago, a race in which he was originally the pacemaker. He kept going, and was rewarded with 2.04.56, the second fastest in history. “The organiser told me I could drop out when I finished my pace-making,” Korir said yesterday, “but I felt very fit, and told my manager I would finish. It wasn’t until 41 kilometres that Tergat came past, and took a lead of 20 metres. I didn’t think I could catch him, but when I saw the finish, I reacted well. If the race had been another five metres, even two metres, I think I would have won”.

In contrast to converted track runner Gebrselassie, Korir is a marathon specialist, having run over 20 races - This will be 21 or 22, I’m not sure” - since he began with a 2.12.33 victory in Cancun, Mexico a decade ago. He has an impressive roster of times and victories, his latest win, in 2.06.38, coming in Rotterdam, just a week before Geb’s setback in London six months ago. “I’m glad that Gebrselassie is running, I find when you run alone, you don’t do so well. He’s been used to running on the track, he’s not a marathon specialist. I think I can beat him”.