World Marathon Majors Resumes this Sunday with the real,- BERLIN-MARATHON 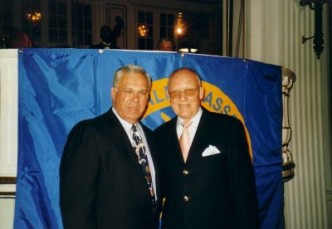 Rüdiger Otto, general manager of SCC RUNNING, together with the mayor of Boston Thomas M. Menino at the BAA Boston Marathon.
© private

When the field races away from the starting line at the real,- Berlin Marathon this coming Sunday, September 24, not only will it signify the beginning of yet another world-class battle on the streets of the German capital, it will also represent the resumption of the 2006 World Marathon Majors Series.

Inaugurated in the spring with the Boston and Flora London Marathons, the World Marathon Majors Series is an innovative collaboration among the world's five leading marathons – Boston, Flora London, real,- Berlin, The LaSalle Bank Chicago and ING New York City – with a $1,000,000 USD prize purse divided between the series's overall male and female winners. With the fall marathon season about to begin, the real,- Berlin race will be the first opportunity for another crop of elite competitors to stake their claims.

At the present time, Robert Kipkoech Cheruiyot (KEN) and Rita Jeptoo (KEN), the winners from Boston , are tied at the top of the leader board with Felix Limo (KEN) and Deena Kastor (USA), the victors in London . Cheruiyot and Limo have committed to race in Chicago , however, and Jeptoo and Kastor have signed on for New York , meaning that the outcome in Berlin will have considerable ramifications for the World Marathon Majors standings.

Greatest attention is being focused on Haile Gebrselassie (ETH) who is contesting the real,- Berlin race for the first time. The legendary Ethiopian has a marathon best of 2:06:20 from Amsterdam in 2005; but, although talk always turns to world records when The Emperor toes the line, it will be the victory - and its accompanying 25 points – that will be most important if he is to claim a share of the WMM prize purse. Among the women in Berlin , Gete Wami (ETH) assumes the favorite's mantle following the late withdrawal due to injury of the Olympic champion, Mizuki Noguchi (JPN). Wami has a PB of 2:22:19 and is among the most accomplished female distance runners of all time; however, she may expect a forceful challenge to come from Salina Kosgei (KEN), the winner in Paris in 2004 and the owners of a personal best time 2:24:32 .

The outcome in Berlin may be far from certain; what is assured is that, once the race has been completed, there will be two new names atop the WMM leader board, making it a three-way tie among both the men and the women.

That, of course, will be a temporary state of affairs, not to mention the point at which things start to get really interesting. The clash between the current leaders – Cheruiyot and Limo in Chicago , and Jeptoo and Kastor in New York – may prompt untold upheaval at the head of the table, not forgetting the impact that those further down the leader board may have. Notably, Benjamin Maiyo (KEN), third on the roster courtesy of his second place finish in Boston, will be trading strides in Chicago with Cheruiyot and Limo.

Currently, positions on the leader board are as follows:

Competitors in the World Marathon Majors series accumulate points in each of the five marathons in which they participate over a two year period. They may contest as many races as they wish, but only their four best count towards the standings. Also, they must compete in a World Marathon Majors event in each year of the two year scoring period. Although the series functions on a two year rotation, the cycles overlap. Hence, the World Marathon Majors cycles proceed as follows: 2006/2007; 2007/2008; 2008/2009, etc. The prize money for the first cycle will be awarded at the end of 2007, with $1,000,000 USD divided equally between the first placed man and woman. Thereafter, prize money will be awarded annually. Note: in the years in which they occur, the World Championships and Olympic Games marathons are also part of the series.

The first five male and female runners across the line in each World Marathon Majors race score points as follows:

Standings, breaking news and further information about the World Marathon may be found at www.worldmarathonmajors.com.