real,- BERLIN-MARATHON on Sunday with 39,636 runners from 105 nations and topstars 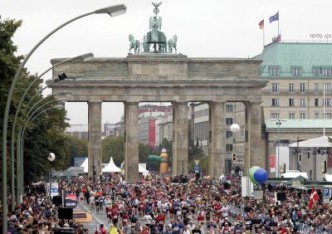 The Brandenburg Gate is passed shortly before the finish.
© Camera 4

Germany’s most spectacular road race will be started this Sunday: the 33rd real,- BERLIN-MARATHON. 39,636 runners and walkers from 105 nations have entered the race, about one million spectators are expected to line the course. Men’s favourites are Haile Gebrselassie (Ethiopia) and Sammy Korir (Kenya) while Gete Wami (Ethiopia) and Salina Kosgei (Kenya) seem to have the best chances to collect the 50,000 Euro prize for first place.

The real,- BERLIN-MARATHON belongs to the new World Marathon Majors (WMM) series, which surely is another upgrade for the race. Besides Berlin the BAA Boston Marathon, the Flora London Marathon, the LaSalle Bank Chicago Marathon and the ING New York City Marathon belong to this Premier League of marathon running.

„We are the fourth biggest marathon in the world and it is our aim to keep this position on Sunday“, said Rüdiger Otto, the managing director of event organiser SCC-RUNNING. Besides a field of 39,636 runners there will be 147 handbiker and 40 wheelchair athletes in the race on Sunday. On the day before the real,- BERLIN-MARATHON for inline skaters will take place with 7,932 athletes.

It will be Haile Gebrselassie’s aim to at least improve his Ethiopian record of 2:06:20 hours. He will of course have the world record of 2:04:55 in his mind, although he refuses to talk about it. His big rival Paul Tergat (Kenya) had run this time in Berlin in 2003. Gebrselassie will meet the second fastest runner of all times on Sunday: Sammy Korir (Kenya) had placed second behind Tergat in Berlin in 2003 with 2:04:56. “Although Mizuki Noguchi had to cancel her race in Berlin due to injury I am convinced that we will see a high-class women’s race”, Race Director Mark Milde said. Gete Wami, who has won three Olympic medals on the track during her career, will race the real,- BERLIN-MARATHON for the first time. The Ethiopian has a personal best of 2:22:19 from Amsterdam 2002. She will meet Salina Kosgei (Kenya), who had won the Paris Marathon in 2004 with 2:24:32.