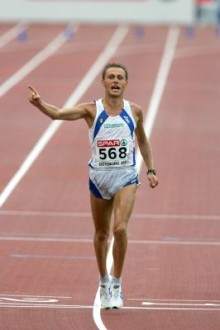 „I will decide later together with my coach if I will run a fall marathon,” said Stefano Baldini, who already won two bronze medals at world championships but wasn’t able yet to win a World Marathon Majors race in either Boston, London, Berlin, Chicago or New York. Due to regeneration the only possible fall race would bet he New York City Marathon on November 5th.

In a slow European championships marathon half way was passed in 65:44 minutes.  The Portuguese, Italians and Spaniards ruled the scene in the lead – just Viktor Röthlin and the Finnish titleholder Janne Holmen, who finished seventh in 2:13:10 hours, were not from these countries of the 11 runners strong leading group.