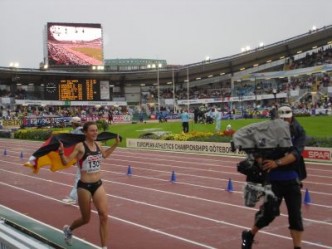 Ulrike Maisch on her victory lap at the Ullevi stadium in Gothenburg.
© mr

The 29 year-old runner accomplished a novelty in Germany’s athletics history. Never before a female German marathon runner won a gold medal at international championships – neither at European Championships nor Olympic Games or World Championships had this happened before. The only German runner who was able to win marathon gold was Waldemar Cierpinski. 1976 and 1980 he was Olympic Champion in the dress of the German Democratic Republic.

„My goal was to be among the top eight. I have never thought about winning a medal. That was totally utopian. I still can’t believe it,“ said Ulrike Maisch after her victory. She came to Gothenburg with a personal best of 2:31:21 hours. She was ranked number 17 in the start list. Her biggest success besides her victory at the international inconsiderably Bonn Marathon in 2002 was the eighth place at the European Championships in Munich four years ago.

„I knew that the European Championships would be the only chance for a good result. The Asians and Africans are unbeatable at World Championships or Olympic Games. It was the chance and I took it,“ said Ulrike Maisch. Additionally the marathon in Gothenburg didn’t have a strong field. From the European top ten marathoners only three were competing at the European Championships. The others prefer running at the lucrative fall marathons like Berlin, Chicago or New York. The British marathon world record holder Paula Radcliffe is not running any marathon this year because she is pregnant. But that doesn’t detract the achievement from Ulrike Maisch, after all she beat competitors who were thought to be stronger.

The allocation and the race development accommodated Ulrike Maisch and made the „wonder of Gothenburg“ happen. „This race was made for me,“ said the runner who had been preparing in Switzerland in high altitude. „The pace in the beginning of the race was slow and the course was hilly – both were good for me.” Favourites like the Italian Bruna Genovese, who finished fifth, and latter silver medallist Olivera Jevtic led in windy weather conditions most of the time and therefore got tired in the end. In contrast Ulrike Maisch ran in the middle of the big leading group and saved energy.

As both Russians Alevtina Biktimirova, winner of the Frankfurt marathon, and Irina Permitina increased the pace together with Olivera Jevtic shortly after 25 k, Ulrike Maisch was not following. „I knew that the pace would be too fast for me. Instead I was running consistently my own race”. At 35 k Ulrike Maisch was fourth, 41 seconds behind the leading trio. But the leaders miscalculated. One after the other ran into problems and the advantage was melting.

„When I was third I thought that I have a medal now, because I knew that nobody would be able to overtake me. Then I suddenly saw the leader and thought that I would have a chance.” Shortly after 40 k Ulrike Maisch overtook Irina Permitina as well and won gold.

The former track runner Ulrike Maisch came to the marathon six years ago. Without proper marathon preparations she ran in her first marathon in Berlin. She finished 18 in a time of 2:30:34. „My coach told me afterwards that despite the lack of training I was running so good that I should continue to run the marathon,” said Ulrike Maisch, who studies Spanish, French and educational science. For her preparations for the European Championships she took a term off from university. This investment paid off.