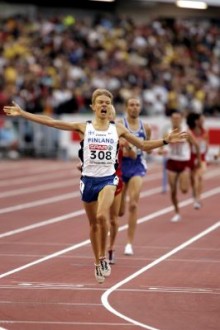 The crowd cheered Swedish Mustafa Mohamed as he increased the pace and took the lead with three laps to go. And he was leading one lap. With the bell and the last 400 m to go, the Spaniard Blanco led already. Tahri was on the third position behind Mohamed. But then somebody came from behind and nobody would have expected him. Jukka Keskisalo overtook one after another and is now European Champion. Ninth of the World Championships in 2003 he is currently ranked number 14 in the European top list. Last year he had to withdraw from competing due to an injury. „That is a big surprise for me,“ said the Finn after the race, „I knew that I would have a chance when the pace would be slow. I have a good kick.”