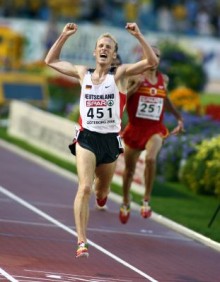 Jan Fitschen achieved something in Gothenburg what even his former idol was never capable of. The 5,000 m Olympic Champion from 1992 had never been European Champion at the longest track distance. As in Munich he had before taken the silver medal at the European Championships in Budapest 1998. This unexpected triumph of Jan Fitschen wakes memories of Baumann’s golden race in Barcelona 14 years ago. “With 200 metres to go I knew that I was able to win the race,“ said Jan Fitschen, who passed the leading Spaniard José Manuel Martínez on the home stretch. He then finished second in 28:12.06. „Just before the finish I looked back on the track, then looked to the video wall, raised my arms and thought: that can’t be true.“

„If you would have told me before that Jan would be the winner here I would have thought you are mad,“ said Fitschen’s coach Tono Kirschbaum, who had also been coaching middle distance runner Rüdiger Stenzel in the 90ies. „I became more and more optimistic from lap to lap. At the end I nearly collapsed on the stands.“ An eighth place „would have been good as well“ the coach said. In winter Jan Fitschen had dismissed the world indoor championships in favor of preparing for Gothenburg. „There were some critics afterwards, but it was the right decision,“ said Kirschbaum. In a couple of high altitude training camps Jan Fitschen had prepared for the European Champs. „It was just his fourth 10,000 metres race in his career – we thought he would have better chances compared to the 5,000 metres race,“ said Tono Kirschbaum.