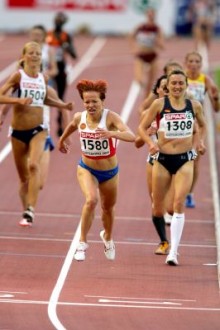 The first long distance final at the European Championships in Gothenburg produced a superb result. At the end of the 10,000 m the Russian Inga Abitova won the gold medal by improving her personal best by nearly one minute to 30:31.42 minutes. The Norwegian Susanne Wigene caused an unexpected Scandinavian success with a great final sprint, finishing second in 30:32.36 minutes. Third was Russian Lidiya Grigoryewa in 30:32.72.

Twelve runners out of 28 finished with new personal bests in nearly perfect weather conditions. Already shortly after the start, the field was divided into a two-class society. With a pace of little over three minutes the former Kenyan Lornah Kiplagat (Netherlands) was leading through the kilometre marks. She had seven runners behind her as she passed the 3,000 m in 9:09,68 minutes and 5,000 m in 15:16,38.

Behind the leading group was a huge gap to the next group, which was lead by Irina Mikitenko – between them ran reigning ING New York Marathon champion Jelena Prokopcuka (Latvia). The German runner Mikitenko showed a courageous race after her maternity leave. But the athletes who were leading the race in the first and second group throughout the entire race were bitterly disappointed in the end.

After the former 5,000 m world record holder Elvan Abeylegesse (Turkey) gave up between 7 and 8 k, the reigning Rotterdam Marathon champion Lornah Kiplagat was overtaken from her pursuers on the last 500 m. Inga Abitova increased the pace and quickly gained a decisive lead. Lidiya Grigoryewa was the next one who passed Lornah Kiplagat but then was passed herself by Susanne Wigene. The 28 year-old Norwegian bettered her personal best by nearly 80 seconds in that final and is not that far away from the Norwegian national record of legendary Ingrid Kristiansen (30:13.74 minutes), which stood as a world record for a long time.

„After about 8,000m I was sure to be able to win a medal but nothing was guaranteed in this race until the very last metres,” said winner Inga Abitova, who wants to run a marathon next year again. „It was a hard race. I was tired after 6 k, but then I found new energy – a dream became true,“ said Susanne Wigene. The destiny of Lornah Kiplagat reminds one of that of Paula Radcliffe at past track finals. The Dutch was fifth in 30:37.26.

Really outwitted was Irina Mikitenko by her team-mate Sabrina Mockenhaupt. Instead of working together to reduce the distance between them and the leading group Sabrina Mockenhaupt seemed to just want to beat her countrywomen Mikitenko. For 9.850 metres she was hiding in the slipstream. Then she passed Mikitenko on the very last 150 metres. She finished eighth in 31:40.28 minutes. Mikitenko was rightly furious after she finished ninth 31:44.82.