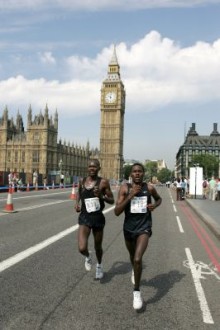 Patrick Makau (right) on his way to victory at the British 10 k.
© Victah Sailer

The British 10 k in London attracted a field of almost 20,000 runners on Sunday. The participants were raising money for more than 350 charities. Kenyan Patrick Makau won the race in a time of 29:52 minutes. He was well ahead of John Nyasyina (Burundi/30:09) and Helder Orneilas (Portugal/30:48). The women’s race was also won by a Kenyan: Catherine Mutwa clocked 34:19 minutes for the distance. There was a big gap to second placed Sarah Stradling (Great Britain/37:07).

On the track of the Athens Olympic Stadium Saif Saaeed Shaheen produced a superb steeplechase race. On Monday night the former Kenyan, who switched nationalities in 2003 and since competes for Qatar, ran the sixth fastest time ever achieved at 3,000 m steeple. Shaheen clocked 7:56.32 minutes. His first race at the distance this year suggests that he might well be able to break his own world record of 7:53.63 at some stage during this season. Former World and Olympic Champion Reuben Kosgei (Kenya) came in second with 8:09.79 minutes. “It was a difficult race because after a bad start I found my rhythm late”, Shaheen said.

Edith Masai completed a rare double at the Kenyan Championships in Nairobi. First she won the 10,000 m on Friday in 32:25.4 minutes. Among those beater were top marathon runners Catherine Ndereba and Susan Chepkemei. On the next day 39 year-old Edith Masai added the 5,000 m title. Clocking 15:54.0 minutes she beat the Athens Olympic silver medallist at the distance Isabella Ochichi by three tenth of a second.

New York Road Runners has announced the first NYC Half Marathon which will be run on 27th August. The race has an entry limit of 10,000 runners and was sold out in a record time of one day only. NYRR president Mary Wittenberg commented: "Our intention is that this event becomes another international sporting event highlighting the very best of New York City." The course will lead the runners through Manhattan.