Promoted under the “Run Paradise!” slogan, the Marathon, Half Marathon, 10 km Fun Run on Sunday 18 June, allowed locals and some 500 foreign participants to take part 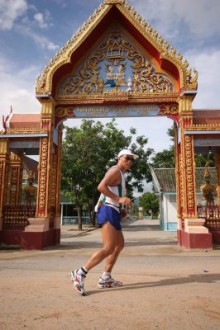 On 18 June 2006, the Thai resort island of Phuket hosted the first edition of the Phuket International Marathon. Thousands of participants attended the event with crowds of runners participating in the marathon and supporting races.

Promoted under the “Run Paradise!” slogan, the Marathon, Half Marathon, 10 km Fun Run and 1 km Kids Run on Sunday 18 June, allowed locals and some 500 foreign participants from more than 30 countries to discover the beautiful landscapes and famous beaches of the island. The event also boasted several celebrities such as Japanese TV personality and former Olympic runner Akemi Masuda, Korean pop star Lee Hee Jin from the girl band Baby Vox and world-famous scientist Alan Coleman, who was instrumental in the cloning of Dolly the Sheep.

Raimund Wellenhofer, Managing Director of event organizer Go Adventure Asia said: “For its first edition, the Phuket International Marathon has exceeded our expectations. Thanks to the combined effort of local government, sponsors and the entire Phuket community, the whole week-end was a success. The feedback from participants and the media has been wonderful and we look forward to doing it again next year on June 17th.”

More than just a marathon

“To all the participants, I think that this was more than just a marathon. It’s about experiencing Phuket and its magnificent surroundings, it about telling the world that Phuket in back, it’s about traveling, it’s about families participating together and, most importantly, it’s about having fun” he added.

“We are particularly proud of the turnout of international runners and media. We had runners and media from the US, Europe, Australia, Japan and more. This clearly shows the strong interest of the international community in this event and the potential for the next edition. The Phuket International Marathon festival will be even better, even bigger next year, I am sure” said Raimund.

Winner from Taipei and USA

The overall marathon winner was a runner from Taipei named Shih Chieh Ko, while the winner in the women’s group was Heather Alicia Gregg from the US.