Kastor opened the 2006 season with a second place at the 26. Vattenfall BERLIN HALFMARATHON and her victory at the Flora London Marathon 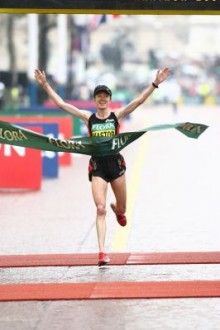 
The announcement comes after much discussion about where Kastor would follow up her record-setting win at the 2006 Flora London Marathon. Kastor’s victory in 2:19:36, an American record, made her the eighth woman in history to break the 2:20 barrier in a marathon and the fourth-fastest female marathoner ever. Kastor had opened her 2006 season three weeks earlier at the 26. Vattenfall BERLIN HALFMARATHON, where she broke her own American record in a time of 1:07:34. In 2005, Kastor won the LaSalle Bank Chicago Marathon in 2:21:25.


Kastor made her marathon debut in New York in 2001, finishing seventh overall (2:26:58) and winning the USA Marathon Championships. In 2004 she gallantly returned just 11 weeks after her bronze medal finish at the Olympics. Fighting leg cramps, she was forced to retire midway through the race.

A resident of Mammoth Lakes, California, Kastor is the first professional female athlete announced for the ING New York City Marathon 2006. Her decision to run in New York adds to the excitement surrounding her first-place standing in the World Marathon Majors, a two-year series that showcases the sport’s top athletes and awards an unprecedented $1 million champion’s prize. The WMM also includes the Boston Marathon, the Flora London Marathon, the real,- BERLIN-MARATHON, and the LaSalle Bank Chicago Marathon.