IAAF org: In an atypical year, another "Mini" victory for Kiplagat in New York City 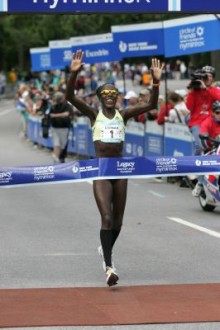 “There will be at least three women with 800 metres to go,” Mary Wittenberg, CEO of the Mini’s organiser, the New York Road Runners, had predicted on Thursday, with Kiplagat and Johnson also expecting a close race.