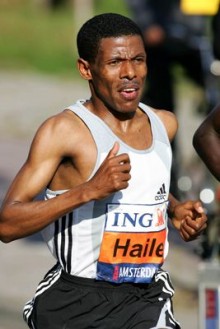 Haile Gebrselassie’s next marathon will be the 33rd real,- BERLIN-MARATHON on September 24th. This announcement was made by Berlin’s Race Director Mark Milde today. The signing of Ethiopia’s superstar is among the most high-carat commitments ever in the history of the biggest German marathon race which belongs to the formation of the World Marathon Majors (WMM). Haile Gebrselassie is the second star runner signed for this year’s real,- BERLIN MARATHON. On September 24th Japan’s Olympic Champion Mizuki Noguchi will run in Berlin as well. Last year she won the race in a new Asian record of 2:19:12 hours.

So far Haile Gebrselassie ran a marathon four times. At an age of 15 he ran his first marathon in 2:48 hours in Ethiopia. His real debut followed many years later: In London he finished third in a very fast 2:06:35 in 2002. After he winning Amsterdam with a world lead of 2:06:20 hours last October, he didn’t run that well at the Flora London Marathon in April. Haile Gebrselassie finished ninth in 2:09:05 hours.

Scoring points for the Jackpot of WMM

The improvement of his personal best is his premier goal at the real,- BERLIN MARATHON. Furthermore Haile Gebrselassie hopes to collect his first World Marathon Majors’ scoring points for the jackpot in Berlin after missing out in London. In the WMM series the best runners of the world collect points in a two years’ cycle. Besides Berlin the BAA Boston Marathon, the Flora London Marathon, the LaSalle Bank Chicago Marathon and the ING New York City Marathon belong to the series. The Olympic Marathons as well as the World Championship Marathons will also count for the jackpot race. The best male and female runners will share the jackpot of one million US-Dollars at the end of the two year cycle. A maximum of four races will be counted.