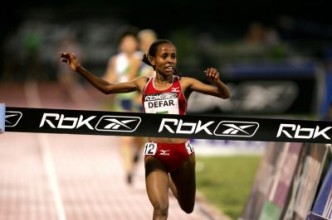 Meseret Defar finishing with a speedy last lap became the first-ever African holder of the world 5,000 metres record at the Reebok Games in New York. Defar clocking 14minutes 24.53seconds, sliced a marginal 0.15seconds from the mark Elvan Abeylegesse set two years ago in Oslo. "Haile Gebrselassie encouraged me. He said: Go to New York and I know you can break the world record. I was very confident when I saw the one-lap-to-go split time," said Defar after the race.

Ethiopia's Olympic 5000m champion although never on schedule, achieved the feat when running close to 61sec on her final circuit of the Icahn stadium track. That saw her final stride snatch, away her Turkish rivals world record, although Abeylegesse herself is Ethiopian-born, before switching nationalities.

"I will try to further improve the record. And I will run five Golden League Meetings thi season, hoping to win all of them," Meseret Defar explained.