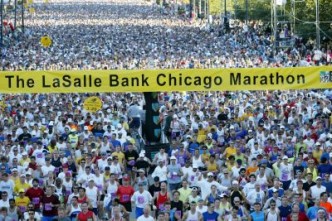 The 2006 LaSalle Bank Chicago Marathon reached its 40,000  participant cap today and has officially closed registration sooner than ever – nearly five months in advance of the October 22 Race. A limited number  of  entries are still available to runners through the 60 charities affiliated  with  the  2006  Marathon.  International  runners can access a limited  number  of entries through several tour partners. Registration for this  year’s  event  closed  two months earlier than it did for last year’s LaSalle Bank Chicago Marathon.

“Since  we  announced we hit the 30,000 mark 10 days ago we have received a significant  surge  in  registration  numbers  and are again humbled by the overwhelming  demand  to participate in our Race,” commented Executive Race Director  Carey  Pinkowski.  “As  with  every year, there are those who are unable to register and we encourage those individuals to contact one of our charities  or our affiliated tour groups who still have a limited number of available entries.”

Runners who missed the deadline and are still interested in registering for The  29th  LaSalle  Bank Chicago Marathon may do so only by signing on with one  of  the  Race’s  60  charity  partners. International participants may register  through  one  of  several  affiliated tour groups. Information on entries  available  through  these  organizations  is available through the Marathon website chicagomarathon.com.

Since its inception in 1977 with 4,200 registered participants, The LaSalle Bank Chicago Marathon has grown to a field of 40,000 runners attracting 1.5 million  spectators  and  generating  more than $6.3 million for charity in 2005.

The  2006 LaSalle Bank Chicago Marathon will take place Sunday, October 22, starting  and  finishing in Chicago’s historic Grant Park. The Race will be broadcast live on CBS 2 CHICAGO and WSCR-AM The Score 670.

Elite athletes will compete for a portion of the highest prize purse in the sport  ($650,000),  while  also  competing  in the World Marathon Majors, a series  of  the  five most prestigious marathons in the world. The complete field  of  40,000  athletes  will represent all 50 states and more than 122 countries.

The  Health & Fitness Expo will take place Friday, October 20 and Saturday, October 21, 2006 at McCormick Place. The weekend will include more than 150 exhibitors  featuring the newest designs in running gear and shoes, as well as the latest developments in sports, fitness and nutrition.