“Good things come to those who are best prepared and have worked the hardest, who have had optimal coaching and have been supported with the best scientific assistance.” 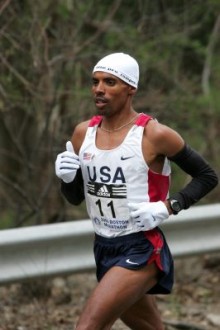 The list of results from the 110th Boston Marathon 2006 clearly show that the US long distance runners are back on the track to success, even if both first places went to runners from Kenya, where for years champion athletes have been emerging:
5 US runners were among the top 10, with a total of 11 US runners among the first 20 in the Boston list of results—that means the best results for the USA since 1983.
That may come as a surprise to those less informed, but for years the top three spots have been dominated by runners from Kenya. Recently, however, those in charge in long distance running in the USA have “turned the rudder around.”

“Since the black days of Sydney 2000, where only one US male and one female competed in the marathon,” states Dr. David Martin, team manager for the US long distance runners, “we have embarked upon a 6-year programme with hard work by both the athletes and the coaches to gain higher achievements, and we have also have received excellent support.”
“Good things come to those who are best prepared and have worked the hardest, who have had optimal coaching and have been supported with the best scientific assistance. That is paying off for us now.”

The turnaround already started in 2004 in Athens when Meb Keflezighi won the bronze medal in the marathon and Deena Kastor was honoured with silver. The US long distance runners ran well in Boston on April 17, with Meb Keflezighi in third place in 2:09.56, Brian Sell running a magnificent 2:10:55 in fourth, Alan Culpepper coming in fifth in 2:11:02, Peter Gilmore seventh in 2:12:45, and finally Clint Verran coming in tenth in 2:14:12.

For the women, Deena Kastor stood out at the Flora London Marathon with her victory time of 2:19:36, making her the fourth fastest woman and the first American woman to run under 2:20. At the Boston Marathon she also ran a new US record, like she did just three weeks earlier at the 26th Vattenfall BERLIN HALF MARATHON, where she set a total of 4 US records.

The US long distance runners also demonstrated excellent results at the IAAF Cross-Country World Championships in Fukuoka, Japan in April, as well as at major road races and on the track. In Stanford on April 30, Alan Webb and Dathan Ritzenhein (both age 23) ran respective times of 27:34.72 and 27:35.65, while Anthony Famiglietti ran 27:37.74 – for both Webb and Famiglietti, this was their debut for the 10 000m. Thus, they all catapulted their way into the all-time US list of the top 12.  It was a planned race where each runner supported the others.

“Kastor and Kezeflighi have proven the value of the group dynamics and joint training, and that the US long distance runners are able to come back to the high level of achievement,” stated Ryan Lamppa, the director of “Running USA”. The bulk of the rebirth of US long distance running is due to the athletes and coaches, of course, but they have also been greatly supported by “Running USA”, New York Road Runners, NIKE, Hansons-Brooks, the Atlanta Track Club and many others who are interested in the continued development of running and a return to old successes. All together, the sport and the athletes are now better off than 6 years ago.

An Example for Germany

This weekend, the men will also have a chance to follow up with good results in the 10 000m race at the German Championships in Tübingen and in the marathon in Düsseldorf.
With Carsten Eich (rhein-marathon Düsseldorf), Martin Beckmann (LG Leinfelden), Embaye Hedrit (LG Braunschweig) and Carsten Schütz (TV Wattenscheid), four long distance runners are hoping to meet the norm of 2:14 for Göteborg – and to support each other in the race, like the US runners did in the 10 000m in Stanford.

Much joint effort is now necessary – for the 12th IAAF World Championships in Berlin in 2009 are not that far off any more. There must be numerous German athletes ready to race in Berlin.

see more:
The IAAF Cross-Country-World Championships in Fukuoka/JPN on april 1 + 2, 2006
Dr. Dave Martin: "I cannot imagine why a Federation like Germany would not advantage of nearby good quality competition and send full teams." http://www.scc-events.com/news/news004169.en.html