President Mr. Heinz Fischer himself is a runner - Running inside the Wiener Hofburg 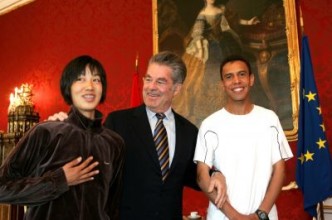 Running inside the Wiener Hofburg

Being told that the President is a runner Tomo Morimoto took the opportunity to invite Mr. Heinz Fischer to jog with her. The President responded immediately, took his jacket off and the two ran along a long splendour corridor inside the Wiener Hofburg.“My next big goal is to qualify for the World Championships’ marathon in Osaka in 2007. But I will not run another marathon this year”, Tomo Morimoto said.

Vienna had been only her second race at the classical distance after finishing fifth in Osaka earlier this year with 2:27:46. Besides a personal record in the marathon the 22 year-old broke another personal best during the race. Tomo Morimoto was timed at 72:02 minutes for the second half of the race. Her previous personal best at this distance had been 72:17. These achievements suggest that there is much more to come from Tomo Morimoto.