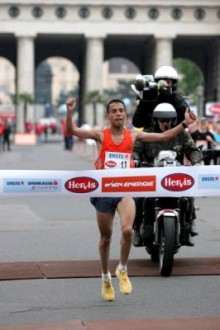 In the men’s race the beginning was a fast one. 5 k were run in 15:05 minutes and the 10 k mark was reached in 30:16. But some of the early sped was lost in the middle of the race. Eight runners were in the leading group that passed the half way mark in 64:22 minutes. The course record of Samson Kandie (Kenya), who had run 2:08:35 two years ago, then seemed to slip away when the splits were around 3:05 minutes for several kilometres. 30 k was reached in 1:31:48. It was shortly before that point when the group broke up. Mrikik and Chebet took the lead and at around 38 k the Moroccan increased the pace once more. He clocked 2:55 minutes for the next kilometre and decisively left behind Chebet, whose brother Joseph had won the race three years ago. “I had chosen Vienna because I new that the pace would suit me. It was my aim to run sub 2:10 but I did not expect a 2:08 before. But today everything was perfect: my form and the weather conditions”, the 34 year-old winner said. Lahoucine Mrikik, who partially trained with former London Marathon winner Abdelkader El Mouaziz in Morocco, had entered the race with a personal best of 2:13:31.